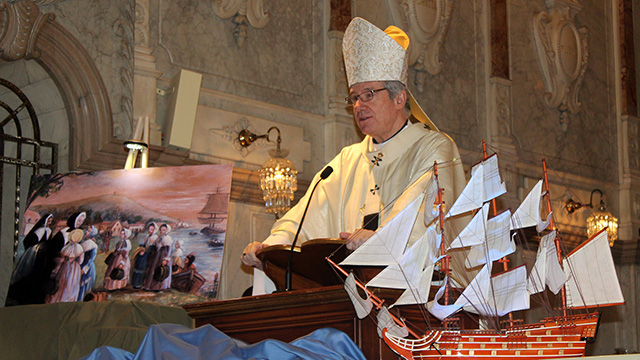 A million-plus-one things have changed on the Island of Montreal since the first permanent settlement was founded 375 years ago but not the holy ground upon which stands Notre-Dame-de-Bon-Secours Chapel in Old Montreal.

At various moments in the city's gallop through history, pressure had been exerted to expropriate or reconfigure the property, but "the Congregation of Notre Dame defended this chapel [along with the Sulpicians] and preserved this consecrated land," noted Archbishop Christian Lépine Jan. 15 during the feast day mass for St. Marguerite Bourgeoys.

The Mother of the Colony and foundress of the Montreal-based congregation was the driving force behind the building of the historic pilgrimage chapel, then located just outside the walls of the fledgling missionary colony. The land was blessed in 1655, 13 years after Paul de Chomedey de Maisonneuve and Jeanne Mance founded Ville Marie, now Montreal, with about 40 settlers.

To make a pilgrimage, to embark on a journey to a holy place or for a holy mission was a familiar and noble pursuit for 17th-century French Catholics. The Ville Marie mission, however, did not capture the public imagination; it was considered "foolish, headed for destruction," the archbishop pointed out during his homily.

"Crossing the Atlantic in those days was like walking on water, you never knew whether you were going to make it or not. Why did she do it?" the archbishop asked. "Because of belief in God.

"She knew Christ was with her; she reached out to him, trusted him; she was attached to Jesus Christ through prayer and through the Blessed Sacrament."

For Marguerite and her contemporaries, "prayer and action went hand-in-hand; they weren't separate," Lépine explained. "That is why Marguerite's model was Our Lady of the Visitation. Mary went to visit Elizabeth. This is what it means to be in the world; it means to bring God with us.

"She couldn't help people if God wasn't living within her," he observed. "How can we find the will to love like this?" he asked, "By having God in our hearts."

A Stranger and You Welcomed Me

The Jan. 15 bilingual celebration was held on the Sunday closest to St. Marguerite's feast day (Jan. 12), which coincided with the Church-sponsored World Day of Migrants and Refugees.

In the welcoming address, museum animator Carole Golding invited the assembly to remember "all those who have crossed the ocean of indifference as refugees and who are often treated as a problem."

"Let us welcome immigrants, refugees, our neighbors as Marguerite did," she exhorted the assembly of 250 laity and religious who filled the St. Paul Street chapel.

The entrance procession for the 10:30 a.m. mass included a scale-model "tall ship" carried by Sr. Agnes Campbell, CND congregation leader. It was placed in the sanctuary, opposite a painting of St. Marguerite welcoming the newly arrived filles du roi.

The ship represents the journey, Sr. Joyce Roberts of the Marguerite Bourgeoys Museum and Chapel said during an interview.

"The first settlers arrived by ship; Marguerite herself made seven trips across the Atlantic to secure resources for the colony," she explained. "Until the 1960s, most newcomers to Canada arrived by ship and on this Sunday, dedicated to praying and working for refugees and migrants, the boat represents the hardships that many endure to seek a refuge from difficult circumstances," she said.

Model ships are a singular feature of Bon-Secours Chapel, aka the Sailors' Church. Numerous scale-model ships are suspended from its ceiling, gifts over the centuries of the many seafarers who attributed their safe arrival in Montreal to the Marian sentinel atop the chapel, Mary, Star of the Sea, who overlooks the harbor

At Marguerite's death in 1700, the congregation numbered 40 members, the archbishop noted, some were from France; most were Canadiennes, but they also included a couple of Anglophones and two Amerindians.

Over the last three-and-a-half centuries, more than 7,000 women have followed in Marguerite's footsteps. Today, the congregation has 850 members, present in nine countries. The languages spoken in the congregation are French, English, Spanish and Japanese.