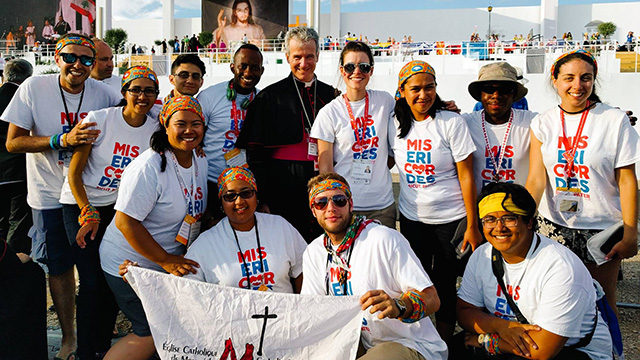 World Youth Day brought together more than two million young people from around the globe. Participants from our archdiocese share their impressions and memories of this major 2016 summer event.

The city that adopted St. Faustina as its patron saint welcomed the Mission Jeunesse Montreal delegation with great hospitality that easily overwhelmed new and experienced World Youth Day pilgrims alike. The love put into the preparation and organization for the Days in the Diocese of Lodz was both tangible and felt. The selfless service of hundreds of volunteers from the diocese of Lodz in collaboration with the Chemin Neuf community created a beautiful program culminating in a weeklong event that was fittingly called Paradise in the City Festival.

Arriving in Lodz where we were to encounter our first host families was to me a daunting process. We were going to share the home life of families we'd never met, and we weren't even sure in what language we would communicate. Additionally, we had just finished a week of visiting Prague and Vienna, where the group had spent a wonderful time together attending mass daily, exploring the cities, and sharing great experiences. It seemed like our time as a group was coming to an end too quickly and we'd be split up into small groups and staying in separate places, unsure of what to expect and away from those who had made the pilgrimage so special up until this point.

Pictures of The World Youth Days:

Now that all the pilgrims have returned, they are back into the swing of things, work, school. However, what these young people experienced will have changed them forever! On November 18, 2016, they will have the occasion to reunite at Mary Queen of the World Cathedral, in company of Archbishop Christian Lépine and the Youth Ministry Team.