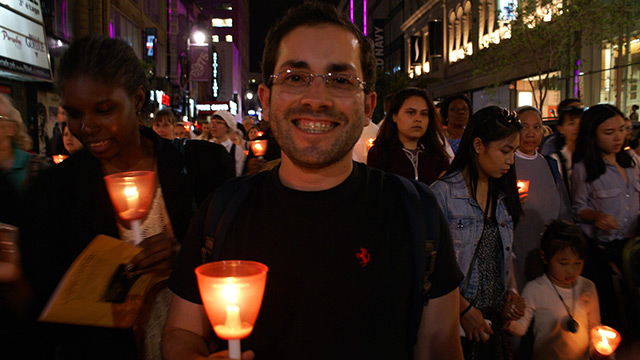 On June 15, 2017, about 3 000 people celebrated Corpus Christi in the streets of Montreal. Recap of popular celebration among the faithful.

Like every year, Mary Queen of the World Cathedral was packed, and the procession was filled with as much joy and prayer as it always is.

This year, to highlight Montreal's 375th anniversary, the homily was given by a special guest who came directly from France specifically for this event: Bishop Yves Le Saux, Bishop of Le Mans, the diocese where La Flèche (Anjou, France), the city where Jérôme Le Royer de la Dauversière (1597-1659) lived, is located. Founder of the Congregation of the Religious Hospitallers of St. Joseph and instigator of the founding of Montreal, Dauversière has been declared Venerable by the Catholic Church.

During his homily, Bishop Le Saux stated that "the first contribution that this city's founders made, on May 17, 1642, was to sing a hymn to the holy Spirit, and celebrate Mass, followed by a time of adoration... That is significant."

During an interview before the Mass, he expressed his wonder at seeing that there was such a missionary current during that era: "Basically, it was a big network. Jeanne Mance, Maisonneuve, and all the others, they all crossed paths one way or another, and were all united by the same desire to regenerate the Christian society of their times. I believe that all of this speaks to us for our times. We have something to learn from these people and, in fact, we are at a time when we seem to be rediscovering them and this part of history."

Bishop Le Saux concluded his homily with a picture that is worth a thousand words for the "disciple/missionaries" that we should be: "A true Christian is like a wood stove: when the fire is lit inside, it radiates heat on the outside!"

After the Mass, all the priests, deacons and their spouses, the Knights of Columbus and the knights and dames of the Equestrian Order of the Holy Sepulchre of Jerusalem were all followed by thousands of faithful, proud to publicly witness their faith in the real presence of Christ.

The torchlight procession was carried out amidst hymns and prayers. The Blessed Sacrament led the way, on top of a small float. The Archbishop asked to walk behind the float rather than kneeling on a prie-dieu on top of it, without knowing that that is what Pope Francis does during the same procession in Rome, as he can't kneel. Our Archbishop wished to leave the place of honour to the Lord in its entirety.

Once at Saint Patrick's Basilica for the Benediction of the Blessed Sacrament, Most Rev. Lépine simply invited the faithful to take the time to kneel before God. "These are always precious moments between brothers and sisters, and I thank God for having given us this wonderful gift: the Eucharist. Let us give thanks to God!"

Some testimonials collected during the procession:

Why come to this procession?

"I am here for several reasons: to demonstrate my faith publicly, even though I am generally a reserved person, and state that I believe that it is the living God. There are so many demonstrations in the world where people try to extinguish the Christian faith, so we must show Jesus' presence to the world"- Bertha Dorotik, a Montreal resident.

"Because I love Jesus! I am a Christian. It is a beautiful way to express my love for God and show everyone that he is alive!" - José, a Montrealer since 2 months ago, Columbian (who spoke French really well!)

"To praise the Lord! To show the world that faith is alive and strong in Montreal! Even though the churches aren't full, we are here! We wish to show that his body and blood are precious to us; he gives us life!" - Marcella, Alvaro and their four children, from Bois-des-Filions

"To pray to the Lord! To venerate his body and blood! To be with other Christians!" - Alice Rousseau from Montreal

"This is my first time... It is a beautiful moment of reflection and inner contemplation." - Suzanne, a Montrealer since September.

Synod 2018: We need you!
Diocesan Policy for Responsible Pastoral Ministry