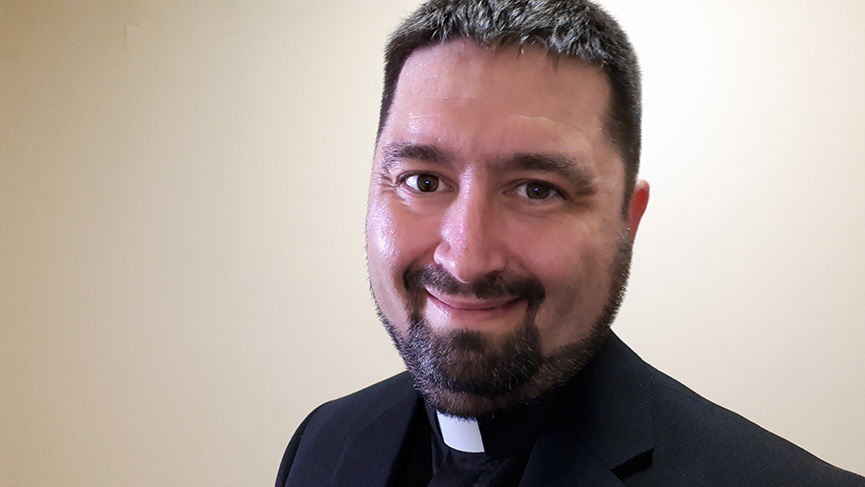 On October 4, at 7:30 p.m., on the Feast of Saint Francis of Assisi, Francis Bégin will be ordained deacon at Marie-Reine-de-la-Paix Church in Pierrefonds. In the following testimony, you will discover how he was called to the priesthood by God.

In my youth, very few people could have predicted that I would one day be on my way to the priesthood and, still, the Lord calls and He calls whomever He wishes.

First of all, I was not raised in a family that was particularly religious. I can count on one hand the number of times I went to church with my family. Yet, at a very young age I was wondering about the meaning of life and death, and about the afterlife. I do not know why, but I was drawn to God, the Bible and religion.

As a young adult, I studied cabinetry at l’École du Meuble; I worked in the furniture industry for some years. It is during this period that my faith grew. I started going to church and discovered a youth group, the R(cube), with which I journeyed. In those days, my life plan was simple: I wanted to get married and have kids. But, in life, though one plans ahead, God’s plans prevail. It so happens that God had planned something else for me. I started feeling the call to the priesthood for the first time at the age 22. I prayed a lot about the matter and also journeyed with a priest. But at 22 years of age, I was young, ambitious, and I found my plans much more interesting compared to those of God. So, I did not answer His call, at least, at the time.

I kept leading my life the way I wanted to. I enrolled in a computer studies program and became a Web programmer. I started working as an employee, and then became a freelancer. Professionally, business was good, but I felt emotionally and spiritually empty. This is when I began wondering about life’s biggest questions again. I got reinvolved in the Church. I became a catechist for the Cathécuménat, I attended Cursillos, and discovered Saint John Paul II’s Theology of the Body. Discovering John Paul’s teaching on that subject profoundly changed my life.

This spiritual quest brought me closer to God and I felt the need to fulfill His will. I went through a Year of Discernment. During that time, the call to the priesthood became stronger than ever. This is when I finally said “Yes” to the Lord; it had been burning inside of me for so many years, but I was in denial. Yet, at the moment I said “Yes,” I felt an indescribable inner peace.

I made wide detours, but during all that time God was shaping me. He used my desires, my ambition and even my weaknesses to shape me according to His will. After that Year of Discernment, I realized that the Lord had started planning for me from an early age. He gave me signs during my youth, so that I could understand His will. This is not something one sees as a child, but when one goes through a life review, connections are made and it suddenly makes sense.

Now, after seven years of seminary, the Archbishop of Montreal is calling me to the Sacred Order of the Diaconate.

On October 4, at 7:30 p.m., at Marie-Reine-de-la-Paix Church, Bishop Thomas Dowd will preside my diaconal ordination leading to priesthood. You are, therefore, invited to celebrate this great event with joy.

Thank you from the bottom of my heart for your prayers and support!

Sick and vulnerable people must be shown the most profound respect
The Season of Creation, protecting our Creator’s legacy

The Season of Creation, protecting our Creator’s legacy