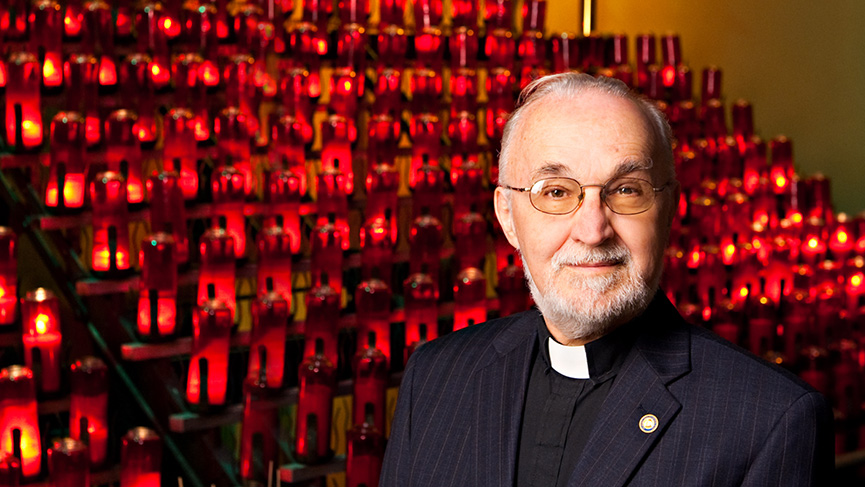 Father Grou, who was the victim of an assault last Friday morning while celebrating Mass, gave reassurance to his staff and the faithful of Saint Joseph’s Oratory of Mount Royal.

“I am not resentful against Mr. Eremia. I hope that he gets all the necessary support and that he finds peace.”

Father Claude Grou, Rector of Saint Joseph’s Oratory of Mount Royal, is convinced that Vlad Cristian Eremia, who assaulted him early Friday morning on March 22, did not have “any personal animosity” towards him. The 26 year-old young man was charged with attempted murder on Saturday.

“I am in good health and back on my feet. I sincerely wish to thank everyone who sent me messages of support, as well as those surrounding me. It really makes me feel good and it enables me to face these difficult moments with serenity.”

“I pray that Saint Joseph’s Oratory stays a place of acceptance, prayer, calmness and peace, as it has been for a hundred years, and I am eager to go back to work,” said Father Grou.

The Shrine says that Father Grou was released from the hospital and will take a few days of rest.

On March 22, at the beginning of the 8:30 a.m. Mass, right before the daily reading of the Gospel, the rector of the Oratory was assaulted and “slightly stabbed on the upper body with a knife” by a “26 year-old suspect known to police”, said Caroline Chèvrefils, Media Relations Officer for the Service de police de la Ville de Montréal (SPVM).

Saint Joseph’s Oratory of Mount Royal thanked “the volunteers and the faithful who bravely intervene, the members of the security service and the staff of the Oratory for being remarkably efficient, as well as the paramedics and the SPVM police”.
“Father Grou asked that regular activities be held at the Oratory,” added Céline Barbeau, who also said that the crypt where the assault occurred is open to public since Saturday, March 23.

Security in Places of Worship

“The news we received on Father Grou’s health is reassuring. I am happy and above all relieved,” confirmed Archbishop Christian Lépine.

Archbishop Lépine is deeply concerned about the fact that the faithful in “mosques, synagogues and churches are victims of violent acts”. It was the case in New Zealand, a week ago, and also in Pittsburg, in the United States of America, last November, he recalled.

And yet, Saint Joseph’s Oratory is a safe haven in the city of Montreal, said the Archbishop. “This place also attracts individuals of other Christian denominations and religions. It is a place where people gather, where everyone is welcome.”
Must security be increased in places of worship? “A public place must remain public,” said the Archbishop. “The doors must remain open.”

The challenge, locally, is to be “welcoming and calm, while remaining vigilant”. But it is also, on a social level, to “foster paths of peace and learn how to overcome violence”.

“Violence will never be a solution. It will entail only other problems,” believes the Archbishop of Montreal, who welcomes people to keep going to places of worship with confidence.”

In Quebec City, Cardinal Gérald Lacroix said he was shocked by the assault on Father Grou. He invited Internet users not to broadcast images of the assault.