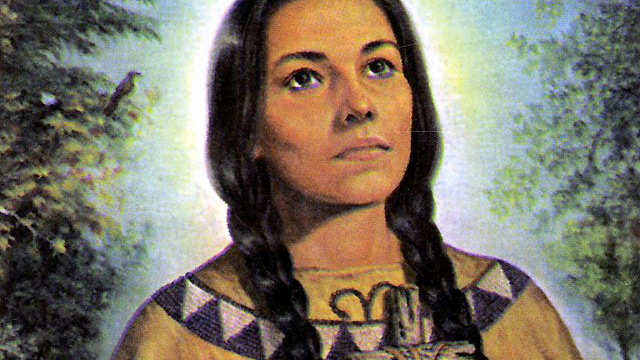 On Tuesday, April 17, the Catholic Church celebrates the life of Saint Kateri Tekakwitha, first North American Aboriginal person elevated to sainthood. Several events will be held at the mission Saint-François-Xavier, in Kahnawake.

Known as the "Lily of the Mohawks", St. Kateri Tekakwitha understood the heart of the gospel message of God's 'first mercy' given to the poor and vulnerable, what was later became known in Catholic Social teachings as the principle of 'preferential option for the poor'.

Born in 1656 in New York to a Catholic Algonquin mother and a Mohawk Chief, she came to understand at an early age what suffering and vulnerability really meant.  Her parents and brother died of smallpox when she was four years old. Kateri was also affected by the disease, which left her almost blind and badly scarred her face.  She was taken in by her aunts and uncle, who was strongly opposed to Christianity.

When she was 11 years old, her village was visited by the Jesuit missionaries Fathers Fremin, Bruyas and Pierron.  From them, she received her first knowledge of Christianity.  When Kateri turned 18, Father Jacques de Lamberville arrived to take charge of the mission in her village. Despite his misgivings, her uncle allowed her to be baptized as long as she remained in the village. Following her Baptism, Kateri lived a pious and faith-filled life, spending hours in prayer and fashioning crosses out of twigs.  She also refused to marry, believing that she was married to God and that no man could take God's place in her heart.  Her beliefs were met with ridicule, hostility and threats.Thus, two years after her Baptism, she fled to St. Francis Xavier Mission, a Christian Mohawk village in Kahnawake, Quebec. It was there that she received her first Communion on Christmas Day 1677. She also made a vow of perpetual virginity on the Feast of the Annunciation in 1679. In Kahnawake, Kateri was known for her faith, holiness and loving regard for the vulnerable in her community. She taught prayers to children, cared for the elderly and the sick, and would often attend mass at sunrise and sunset.

Kateri's health deteriorated in and on April 17, 1680, shortly before her 24th birthday, and was buried at St. Francis Xavier Mission.  Her final words were: "Jesos Konoronkwa" ("Jesus, I love you").  Witnesses report that within minutes of her death, the smallpox scars vanished from her face, which then radiated with beauty.  Today she is known as the patron saint of ecology.

All are invited to join the community at St. Francis Xavier Mission in Kahnawake for the following events in the upcoming week... In the Footsteps of Saint Kateri Tekakwitha: