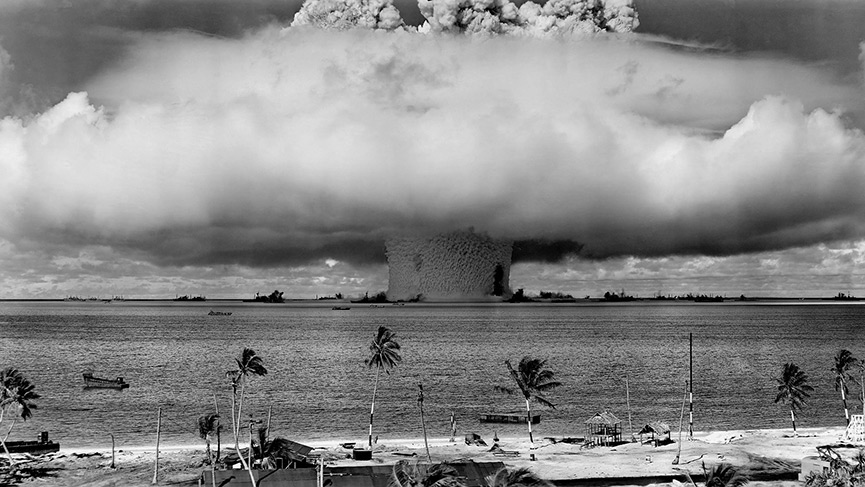 The Social Action Ministry Office joins in the call to rid the world of nuclear arms and encourages the Parliament of Canada to debate this country’s participation in the new Treaty.

The Treaty on the Prohibition of Nuclear Weapons will go into effect on January 22, 2021. Fifty countries signed and ratified this document! Canada abstained, despite the appeals of Jean Chrétien and other political figures1. The International Campaign to Abolish Nuclear Weapons (ICANW), which brought this treaty about, was awarded the Nobel Peace Prize in 2017; Japanese-Canadian Mrs. Setsuko Thurlow was one of the organization’s two representatives who were invited to accept the award.

The Social Action Ministry of the Catholic Church of Montreal supports the campaign2, encouraging Parliamentarians to debate the matter and to empower the Standing Committee on Foreign Affairs and International Development to conduct public hearings on the Treaty and on Canada’s role in advocating global nuclear disarmament.

The Social Action Ministry’s involvement in this broad grassroots movement is motivated by the Church’s social teachings. In his latest encyclical letter, Fratelli Tutti § 262, Pope Francis did not mince words: ‘‘the ultimate goal of the total elimination of nuclear weapons becomes both a challenge and a moral and humanitarian imperative.’’(October 2020). The teachings of Canada’s bishops uphold this same position3.

Director of the Social Action Ministry Louise Royer has also signed an international appeal4: Protect people and the planet, which invites cities, parliaments and governments to:

Mrs. Royer is pleased to note that the City of Montreal did not wait until this appeal before committing to the cause, as it has for several years been engaged as Executive City within the organization Mayors for Peace. In that capacity, the City of Montreal hailed the introduction of the Treaty in an open letter calling for nuclear disarmament by all countries5.

If you are in agreement with this proposal, you can:

Canada – and Montreal – contributed to the development of the atomic bomb6. Would it not be right if we contributed even more to ridding the world of the nuclear threat?

Growing Parish Vitality: Brett Powell on Leadership Where It Matters Most
Christians invited to join virtually in prayer for 54th Week of Prayer for Christian Unity