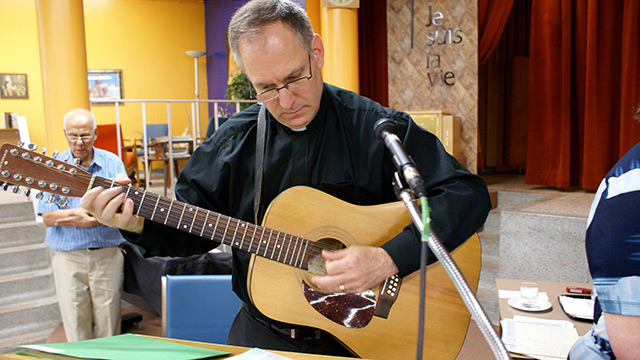 Alain Faubert: In the Heart of a Bishop

On Tuesday morning, April 19, the entire Catholic community was notified: Alain Faubert, the Pastor of Saint-Germain Parish, in Outremont, had just been appointed auxiliary bishop for the Archdiocese of Montreal, to serve alongside Bishop Thomas Dowd in assisting Most Reverend Christian Lépine, the Archbishop of Montreal.

On that morning, Bishop Faubert was attending a retreat day on scripture for Montreal priests. With his guitar in hand, he was ready to share his thoughts, in an intimate setting.

When did you learn the news? "Actually, the Apostolic Nuncio to Canada, Most Rev. Luigi Bonazzi, phoned me on April 13, in the early morning... I was not at all prepared for it! I can't discuss all the details, but... I definitely had to get down on my knees and speak with Archbishop Bonazzi a little... "

"He did not immediately state the reason for his call; he began by speaking about the situation in Montreal... Like many of my colleagues, I was well aware of the situation. We had discussed it all together at an assembly, and Most Reverend Lépine had said that we 'were expecting auxiliary bishops to be appointed,' that it was going to happen soon ... But, never, ever, would I have thought that my name was floating around!"

"You know, it is a process that is carried out quite discreetly... Well! Some of the people in my surroundings are going to have to explain what happened! I sense that some secretiveness took place," he said, as he burst out laughing. "Some people can be quite cunning!"

"My first impression, feeling, was to surrender myself... I am a disciple of Charles de Foucault, so I immediately recited his prayer of abandonment... after that..."

Bishop Faubert was unable to continue. He visibly had a lump in his throat. His eyes were turned to the floor, brimming with tears. He squeezed my hand, in a beautiful moment of silence.

"... After that," he continued, his expression vibrant, "my heart and soul were filled with a great peace... So that, I realized, meant, 'yes'... Yes, Lord, I accept! And then, afterwards, I was filled with this other sentiment: 'Whatever happens. Whatever happens, Lord, you will be at my side.'"

"From that moment on, I was at peace. A great peace. I left discreetly for Ottawa to meet with the Nuncio. On my way, I felt an urgent need to pray. Fortunately, I had brought a Taizé CD. The Taizé prayers accompanied me all the way to Ottawa."

"Within our darkest night, you kindle the fire that never dies away. Lord Jesus Christ, your light shines within us. Let not my doubts nor my darkness speak to me. All of these songs... and Alleluias as well, songs of thanksgiving."

"I arrived in Ottawa in peace. Archbishop Bonazzi is a caring person, warm, friendly, and full of the Lord's mercy. I am not the first to meet him in this context."

"The first thing we did: we prayed together. It was good that this was the first thing that we did... I was able to spend some time in the nunciature's chapel."

"I spent that entire first day taking in the news. I can't say that seven days later, I have accustomed myself to the situation yet... I don't think I realize it yet. I met with Archbishop Lépine and gave him the news myself, and he genuinely felt joyous about it! He was visibly happy to welcome me. Over the past few days, we have been meeting often to plan everything that is coming up... it's all happening very quickly."

"Me, I will contribute who I am. I deeply believe in the beauty of the Church of Montreal, of its diversity, of its expressions, and of its culture. It is our mission to strive for reconciliation and peace. I believe that that's what the people need."

"I will eventually have to leave Saint-Germain, and the people with whom I have had such beautiful experiences... It will be heart wrenching... that's for certain..."

His eyes began to slowly fill with tears again, but he had to go back to sing and play his guitar... Saved by the bell.

His Episcopal Ordination will take place on June 15, 2016