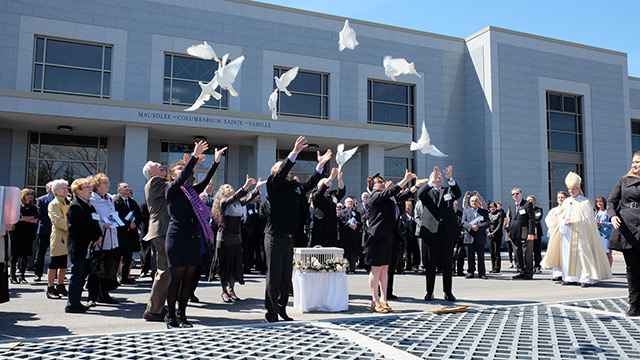 On April 20, 2016, Most Reverend Christian Lépine presided at the blessing and inauguration ceremony of the Holy Family Mausoleum at the Repos Saint-François d'Assisse Cemetery.

In continuation of a tradition that began in the early 1980s, the Repos Saint-François d'Assise Cemetery has erected an eleventh structure to house tombs, the Holy Family Mausoleum-Columbarium.

The blessing and inauguration ceremony was held on April 20, 2016, and was presided by Archbishop Christian Lépine in the presence of representatives from various parishes throughout the archdiocese, namely Father François Baril, the pastor of Saint-François d'Assise Parish. Also attending the event were members of the Association des cimetières chrétiens du Québec (the Association of Christian Cemeteries of Quebec), suppliers and numerous associates of the Repos, which is celebrating its 100th anniversary this year.

In his address, the chairman of the board of directors, Mr. Louis-Philippe Desrosiers, pointed out that the new mausoleum-columbarium, dedicated to the Holy Family, is a modern representation of the family and of the special bonds that unite its members.

Inside the Heart of a Bishop