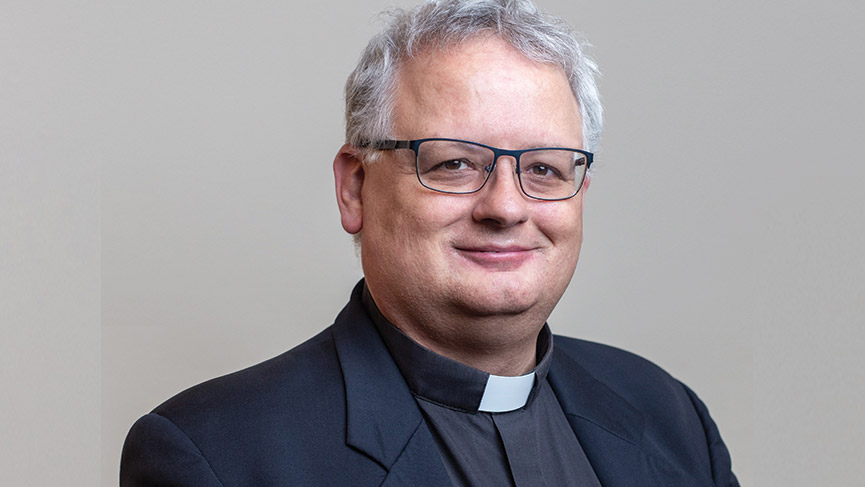 Pascal Cyr, deacon, will be ordained to the priesthood on August 28 at 7:30 p.m. in Montreal's Mary Queen of the World Cathedral. After more than 30 years of journeying towards the priesthood, he will give himself entirely to the service of the Church.

Pascal says his vocation to the priesthood was "a long story".  He had been journeying with different communities since he was 18 years old, and in 1990, at the age of 20, he entered the seminary. He stayed there for 5 years and then finally left the Major Seminary; "The vocation had not yet matured. At the time, I was in the construction trade (as a professional vocation), but I had always left the door open. The doors were indeed very, very open. That's what I wanted, but I knew that within myself I was not ready".

Until 2012, he worked as a contractor in construction. Gradually his heart felt more and more called to the priesthood. Turning again to the seminary he stayed there for 8 years, for a total of 13 years of seminarian life. The traditional path, usually lasting 8 years, includes theoretical studies and "internships" in parishes where he actively participates in parish life.

His journey, which he describes as a "long process", first led him to ordination to the diaconate on August 31, 2018. According to him, this moment was the "big decision", because it is the candidate's lifelong commitment to celibacy, prayer and obedience to the Church and to the bishop. It is the equivalent of marriage in a couple's life.  Presbyterial ordination is like the culmination of service, when one is ready to serve the Church as a priest.  "I was happy to get there," he says.

A Pastor Who Watches Over His Church

For Pascal Cyr, the mission of a priest today is to be "a servant of Christ the Pastor, the Christ who watches over his Church. Being a priest is like watching, but it is not doing things in the place of others. The priest is there like all the baptized in the Church. We are there and we build the Church together" he says.  This dimension of pastoral life resonates more strongly in him, "being the one who watches over others" in the sense of taking care of the flock.

"The spirit of the Lord God is upon me because the Lord has anointed me. He has sent me to preach the good news to the humble, to heal the broken-hearted, to proclaim release to the captives, to the prisoners their deliverance." (Isaiah 61.1) This biblical verse is the one chosen by the transitional deacon for his upcoming ordination. It is this passage that will guide the celebration, as well as a phrase he particularly likes from St. Augustine, celebrated precisely on August 28: "With you I am baptized, but for you I am a priest".

For Pascal Cyr, the great challenge that awaits him in his life as a priest is "the Church going forth, opening up to the world today and not living as in in a closed vacuum".  He adds to this "the formation of missionary disciples", that is to say, forming the Christian community to go towards others. Through this, he has as his great desire communion with and in God for all.

The future priest wishes to thank all those who have supported and accompanied him during these 30 years. As he told an anecdote in a parish, "the chicken is not yet perfectly cooked, so we must continue to cook it quietly. Looks like they sent you a big chicken, so it's a little longer!" Now, he says, "anything can happen" as he leaves himself completely available to the Church.  "It's been a long time to be ready, but the Lord has led me on a long road and today I'm ready where I am. They have been there for me, now I am there for them".

His ordination to the priesthood will take place on August 28, 2020, in Mary Queen of the World Cathedral in Montreal at 7:30 pm. All are welcome to share this moment. Sanitary measures in alignment of de-confinement protocol will apply. The celebration will also likely be webcast. Details to come.