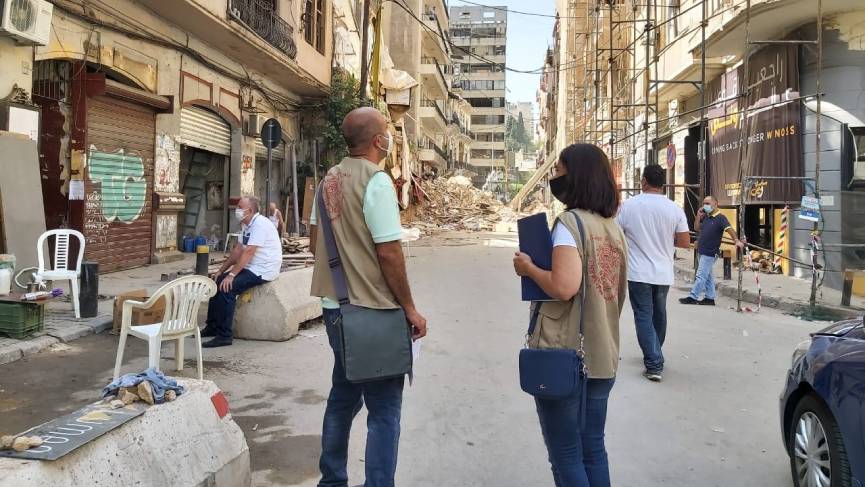 On the morning of August 4, 2020, Mrs. Hashem, a 75-year-old widow living in a modest apartment in downtown Beirut, made the decision to take her daughter to visit her son in a nearby village.  A few hours later, the blast from the Port of Beirut severely damaged her apartment, making it unliveable. Had she stayed home, she and her daughter would most likely have been killed, along with 200 other people who died on that day.  Instead, she became one of 300,000 people that found themselves homeless.

Before the explosion, Lebanon, with its population of 4.5 million, was struggling with political, economic and social challenges that made life extremely difficult. The wars in Iraq and Syria forced more than 1.5 million refugees to seek shelter in the small country, adding to the 500,000 Palestinian refugees already there. Sectarian politics and corruption had already paralyzed the government’s ability to rule, and COVID-19 added new layers of anxiety, restrictions and social strain.

The World Bank Lebanon Economic Monitor report, released June 1, stated that the current crisis in Lebanon is the third worst the entire world has witnessed since the mid-nineteenth century. Some worry the August 4th blast was the unbearable, final blow. The country is, on many accounts, in total shambles. Everything seems to be lacking – food, electricity, water, medicine and petroleum. Some 480,000 jobs have been lost.

The number of people living in poverty has jumped from 20% to 55%.  The blast has contributed to an increase in domestic violence and psychological trauma and has fueled people’s anger.

Without an effective government in place, Lebanese continue to fend for themselves. Thankfully, Lebanon has a large contingent of non-governmental groups that are organized and can act quickly.

Present in Lebanon since 1949, CNEWA has raised more than $6.6 million for direct aid in Lebanon since the blast – more than $1 million from Canadians alone. Thanks to this show of solidarity from Canadians, our Beirut colleagues have distributed food to 15,230 families and helped repair two important hospitals in Beirut, enabling 1,150 employees to return to work and resume services to more than 100,000 in-hospital and outpatients. We have also been able to repair damaged apartments, support small family businesses and much more.

Thanks in part to that aid, Mrs. Hashem was able to return to her home a few months ago.  For the first time in her life, she and her daughter are now lining up at the local food bank.

While the NGO community in and around Beirut continues its tireless work, funds have not kept up with the increasing needs of the people. This is why, one year after the blast most of us in international aid with a presence in the Middle East find ourselves launching new rounds of appeals for donations and prayers. Lebanon’s future continues to be at stake and peace remains fragile. It took some 17 years to find a solution to the violent war that devastated the country from 1974 to 1991. After long negotiations, the Taif agreement (better known as the National Reconciliation Accord) was approved. The time has come for a new political compromise/deal adapted to new realities.  But time may be against us.

The current political vacuum makes the country vulnerable to radicals with an interest, even footholds, in Lebanon. This would be devastating for its people and the hopes many have of Lebanon as an example of plurality and diversity for our world.

That is why, on July 1, Pope Francis held a special day of prayer at The Vatican where Church leaders prayed for peace and healing in Lebanon. His words could not have been clearer:

“…we want to affirm with all our strength that Lebanon is, and must remain, a project of peace”. He continued saying Lebanon’s vocation was to be “a land of tolerance and pluralism, an oasis of fraternity where different religions and confessions meet, where different communities live together, putting the common good before their individual interests”.

Sounds like a noble plan. Canadians can be commended for supporting this.

Feast Day Mass celebrating the Assumption of the Blessed Virgin Mary Followed by a “Jericho March”
Pope's prayer intention for August: Church on the way