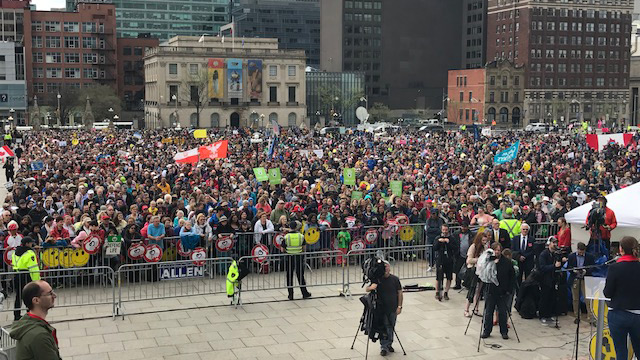 This year’s National March for Life, held annually in Ottawa since 1998, took place on Thursday, May 10, beginning with a rally on Parliament Hill. Marie-Christine, a participant from the Archdiocese of Montreal, shares her experience.

There were thousands of us, people of all ages, from all faiths and from all walks of life, on Thursday, May 10, in Ottawa, united by our desire to protect and lend a voice to the most vulnerable and mute of human beings: unborn babies.

The day began with several masses celebrated in honour of this cause in various churches throughout the capital. At the Ottawa cathedral, which was filled to the hilt, I was enchanted to discover the number of young people there to support the cause of life, in deep prayer.

In his homily, Bishop Thomas Dowd, Auxiliary Bishop of Montreal, recalled the importance of every life. Archbishop Christian Lépine was also present, greeting the numerous people that attended Mass.

Despite the intermittent rain, Parliament Hill was soon filled with enthusiastic people bearing various signs with a message that was echoed in the speeches of the numerous speakers: affirm the primacy of life, "from conception to natural death," as highlighted by the Archbishop of Toronto, Cardinal Collins. He also recalled that the faithful contribute to society and that they have a right to express themselves.

According to Harold Albrecht, Conservative MP, "Governments are judged by the way they treat the most vulnerable. There is no doubt in my mind that the most vulnerable among us are the ones who are living their first nine months as unborn infants. They have no way of defending themselves, and no voice with which to cry out in pain or protest."

At 1:30 p.m., the participants set off on the March for Life to walk through the streets of downtown Ottawa. Once again, I was filled with wonder at the diversity of faces and backgrounds: Anglicans, Protestants, Roman and Eastern Catholics, priests, bishops, religious men and women, monks, fathers, mothers with their children, young people (so many young people!). Among them, a young girl with a rainbow-coloured tuque proudly held up her sign that read "I am queer and I am pro-life!"

There were older people as well, Anglophones, Francophones, people who prayed, sang, took pictures, others who were talking, smiling, all happy to share the same faith in life.

We came to a halt when the pro-choice counter-demonstration blocked our path for a good twenty minutes. I couldn't help but notice the contrast between the calm and dignity that reigned in our ranks, the respectful messages on the signs we were holding, and the rage and cries of these activists, and the hateful messages on their signs (few people, but a lot of noise...). So, we turned on our heels and completed the March by going back on our footsteps, ending in front of Parliament as planned around 2:30 pm.

Finally, the part that touched me the most that day: the testimonies of the mothers and fathers that had chosen abortion and then experienced great difficulties, to finally, with help (many said that they came to a turning point when they understood that God forgives them), come to terms with the death of their children and find peace. Such trying experiences!

They all mentioned their regret at not having known ahead of time what abortion truly involved, as opposed to what they were led to believe. They belong to the "Silent no more" movement. Most of them underwent therapy to heal from the pain of abortion at a specialized centre, "Rachel's Vineyard."

I did not attend the closing prayer service, led by the Eastern Catholic Chaplaincy of Ottawa, because our bus (chartered by the Quebec Life Coalition) had to leave, but I promise to be there again next year. I hope to see you there!