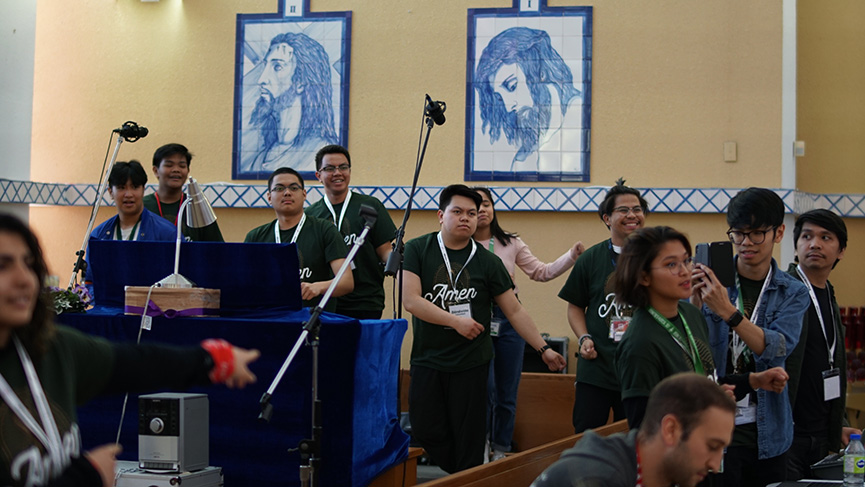 In 1984, Pope John Paul II invited young adults to meet in Rome to celebrate Palm Sunday on this Holy Year. More than 250 000 people answered his call. Due to the great enthusiasm, the pope invited them to gather again on the following year, as part of the International Year of Youth. They came again in great numbers and Pope John Paul II declared Palm Sunday to be, from now on, the day of celebration of World Youth Day (WYD) in the whole Catholic Church, with a new biblical theme from the pope every year.

Twenty-year-old Tahina and Valentina were part of the 200 volunteers who, on that day, were offering to say “Yes to trust” by asking young people to blindly draw something out a bowl! “Boys are more scared than girls,” said Tahina, laughing: “This great gathering gives us strength and enables us to meet young Christians, and we feel proud. This makes us feel good, as we see few young people in our parishes,” adds Valentina.

Further down was the Holy Shot, a photo booth for young people, another way to say “Yes” by smiling!

As for Danielle, she was offering to play a game of Jenga. For each brick retrieved and repositioned, the players would answer a question – often a very personal one – saying, “Yes to sharing”.

Emmanuel and Debbie-Anne, from the Notre-Dame d’Anjou parish, had arrived in Quebec only two months prior to this event. Armed with a pencil and a piece of paper, they were trying to get answers to various questions: “I must find in the room someone who speaks three languages or who was born on the same date I was,” explains Emmanuel, smiling. “This is a fabulous way to open up to people and to get to know them, and to get out of my corner!”

The excitement rose as people played a new version of Jeopardy on themes such as justice for ecology and food, United Nations, human dignity, integral ecology, a pleasant way to revisit Catechism and to reflect upon basic questions!

The Bible as a Comic Strip

Around noon, adolescents started to sing along with the dynamic group Couples For Christ (CFC Youth), creating a festive atmosphere. They were singing, clapping hands, laughing and dancing with a young nun leading girls into a choreography. Archbishop Lépine, who was wearing the official Day T-shirt, got a star treatment! He asked them if they read the Bible, to which they answered with a huge, “Yes”! I was reading the Bible every day when I was your age. I recommend the comic-strip version! Did you know that reading the Bible is dangerous? You get to do the will of God that way, to serve others! But it is worthwhile, because it brings so much joy! When one believes in God, the first thing to do is to praise Him for his presence and his love, so thank you for your praises!”

Later on, adolescents had the opportunity to listen to three testimonies. Seminarian José David Bomero, student at the Grand Séminaire de Montréal, told them about the existential crisis he went through at their age, about the anxiety and the fear of dying he felt, about his questionings on the meaning of life, about his prayers and his call for help. Then, when he turned 20 years old, he had a revelation, words he received as he was preparing for confirmation and was seeking a sign: “Bow low, because your God is here.” After Cegep, José David entered seminary school and has been studying there for two years now. His testimony ended by conveying his experience as part of the Panama WYD group, stating it was like attending the “World Cup of Jesus”.

The Right of God

Archbishop Lépine stayed with the young the whole day. He spoke to the 18-35 years old, telling them about a right not often spoken about, which origin dates back prior to all the other rights: “The Right of God, this recognition that God is our creator, our saviour. By praying, we fundamentally recognize that right God has.”

Like Mary who is a “model of love and of faith, a model for praying and for being charitable”, he urged the young to make God the centre of their priorities, to prioritize Him.

The young people had the opportunity until 3 p.m. to see a sketch about the life of Mary, to listen to testimonies and to praise through singing.

The Youth Festival ended up with a lunch served in the church square. From there, people started walking the streets of Montreal towards St. Patrick Basilica and then to Mary, Queen of the World Cathedral, where Archbishop Lépine celebrated the Eucharist.