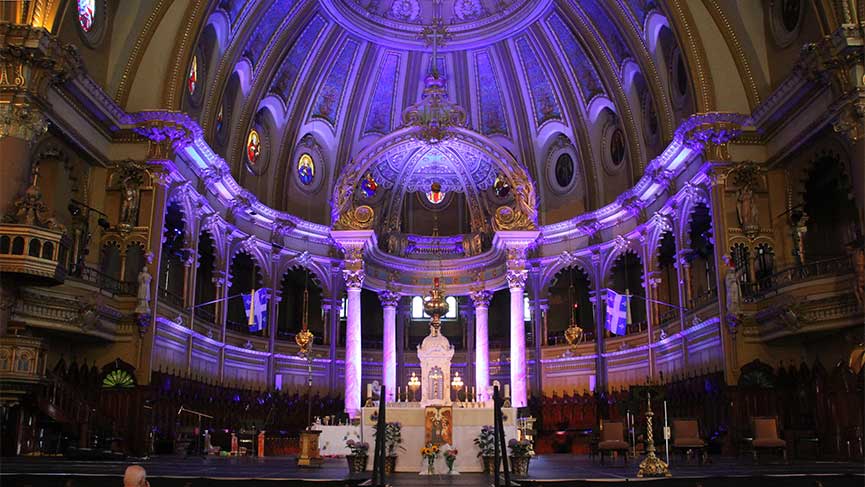 On the 24th of June we will celebrate St. John the Baptist, patron saint of the Province of Quebec. In both the religious and civil calendars, this holiday has for more than 150 years been bringing together great and small, and this year, once again, the Diocese of Montreal will launch the festivities with our traditional Mass for St. John the Baptist at the Church named for him in Montreal’s Plateau Mont-Royal.

Celebrations in honour of St. John the Baptist have a long tradition in Quebec. On June 24, 1834, the hymn by George-Étienne Cartier, “Ô, Canada! Mon pays, mes amours,” was first sung at a great patriotic celebration held near the old Windsor Station in Montreal. Since that date, the event has become an annual affair. In 1842, the procession was initiated which has since become the Saint-Jean-Baptiste Day parade. Floats were added to the procession in 1874, along with the appearance of a little curly-headed boy accompanied by his lamb. To be the youngster who represented the beloved saint in the parade was a great honour!

In 1908, Pope Pius X proclaimed St. John the Baptist the patron saint of French Canadians. In 1925, the provincial government declared June 24 a holiday, and then, on May 11, 1977, it at last became Quebec’s official holiday.

Each year, Saint-Jean-Baptiste Church in Montreal’s Plateau district dons the colour blue to honour our Patron Saint. All of our best finery is dusted off and put on display for the great day. This year, our diocese’s Auxiliary Bishop, His Excellency Alain Faubert, will celebrate this holiday Mass for the people of Quebec. The celebration will be held on June 24 at 10:00 a.m. at Saint-Jean-Baptiste church, 309 Rachel in Montreal’s Plateau district.