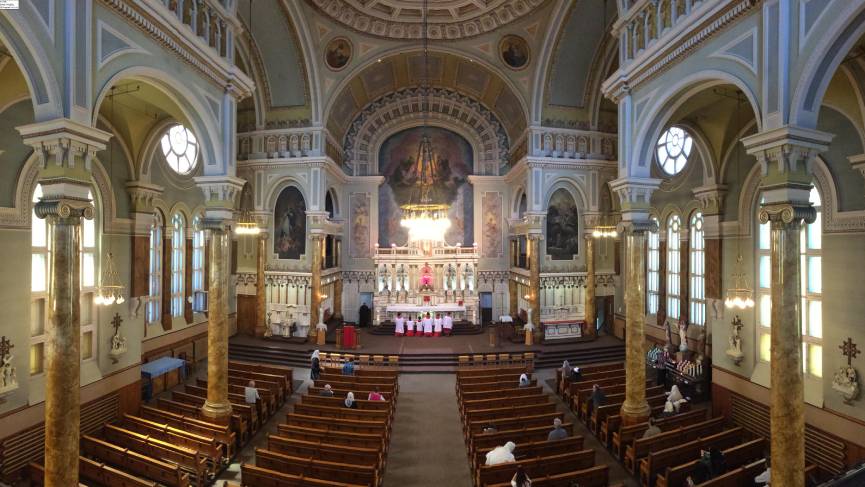 Rodrigue Escayola was strolling during ‘‘the hour of Mass’’ along Boulevard Saint Joseph in August, 2014, when he noticed a church with its doors wide open. He ventured inside and was ‘‘overcome by the beauty of the church and its (historical) richness.’’ When the doors are closed, the outside is sometimes not the best expression of what lies inside.

A few blocks further down, he walked into another church. And then another. ‘‘All of a sudden, it hit me like a ton of bricks. I realized: there is so much rich history here! There is so much faith, so much devotion! But when the doors are closed, which is almost all the time, you would never imagine it. We walk past a building like this as if it were a café or an old bank…’’

Collector of pictures of church steeples

Inspired by Mark Twain’s phrase, ‘’Montreal, city of 100 steeples,’’ he set himself the challenge of visiting one hundred churches. He began in his own parish of Saint-Jean-Baptiste, and one thing led to another, eventually taking him further and further into the diocese of Montreal. He would attend Mass and while there, he would visualize the shots that he would take after the celebration was over.

His fiftieth church was St. Joseph’s Oratory, his hundredth Notre-Dame. Sunday after Sunday, Rodrigue compiled an ever more impressive number of pictures of steeples. They are all arranged by album on his Facebook page with accompanying architectural comments or historical notes on his ‘finds;’ in one such comment he describes how, at the location of Saints-Anges-de-Lachine, there used to be a Fort ‘‘back in the day.’’

‘‘Each steeple ended up having a personality all its own.’’ So after 100 steeples, what had he achieved? ‘‘I’ve realized that, even though I was photographing bricks and glass, it is often the people who have stayed in my memory.’’ Like the priest of Sainte-Anne-de-Bellevue shovelling the whole front walkway of the church before his parishioners arrived because, he said, one of them is going to fall and break their nose. ‘‘That is not in any photo. That just stays in the photographer’s heart.’’

‘‘Why are you stopping now?’’ someone asked him. After all, Rodrigue has visited 157 steeples.

Rodrigue is well aware that resources and funds are limited, that it is not quite realistic to keep ‘‘these treasures’’ always open. ‘‘What’s sad is that people living in these neighbourhoods don’t have the faintest idea of the value of these buildings, of the treasures they house.’’ Pointing to the great interest that churches attract in Europe, even tiny ones in the out-of-the-way countryside, he asks why the same should not be done here, with churches that are so close by, right on our doorstep. ‘‘I don’t say that they should be preserved at whatever cost, but we must find a way to reintegrate them into our realities, to share them, albeit temporarily.’’ He doesn’t have the solution, but his wish is that people would have the nerve to walk into a church, to make it ‘‘less intimidating.’’ ‘‘Because whether you’re a believer or not, when you walk into a church, you can’t help being filled with peace, no matter what your beliefs are. You step inside and there is something about it, if only the silence.’’

‘‘How many of our parents and our grandparents met for the first time at a church dance…,’’ says Rodrigue. Schoolchildren doing homework, Wolfcub pack meetings, movie afternoons in the church basement - how could we put these buildings, these churches, back at the heart of our communities?

‘‘It’s my enduring secret hope that, once people encounter them again, they will make them their own,’’ and they will once again become living places. Worship and culture, as commented ‘‘the priest of Saint-Jean-Baptiste,’’ or worship and many other things, there is so much room to use our creativity, says Rodrigue.

Raising the lights at Saint-Jean-Baptiste
https://www.youtube.com/watch?v=giDGx9q8QP8