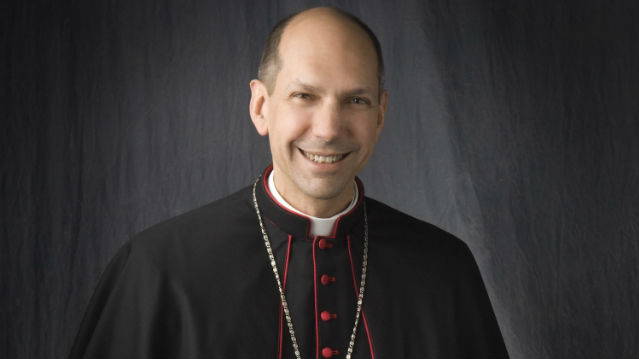 (CCCB) On July 8, His Holiness Pope Francis named the Most Reverend Donald Bolen Archbishop of Regina. At the time of his appointment, he was Bishop of Saskatoon.

He succeeds the Most Reverend Daniel J. Bohan who died in office January 15, 2016, at the age of 74. Since then, the Reverend Lorne Dale Crozon, the former Vicar General, has been Diocesan Administrator of the Archdiocese of Regina.

Archbishop-elect Bolen was born in Gravelbourg, Saskatchewan, on February 7, 1961. He holds an Honours B.A. in religious studies from the University of Regina, together with bachelor's and master's degrees in theology as well as a licentiate from Saint Paul University, Ottawa. After being ordained priest on October 12, 1991, for the Archdiocese of Regina, he did post-graduate studies in theology at the University of Oxford, in addition to serving as priest moderator in several parishes in the Archdiocese and teaching at Campion College, University of Regina. From 2001 to 2008, he worked with the Pontifical Council for Promoting Christian Unity where he served on its staff for relations with the Anglican Communion and with the World Methodist Council.

Upon returning in 2009 to the Archdiocese of Regina, he held the Nash Chair in Religion at Campion College and served as Vicar General and pastor of several parishes before being named Bishop of Saskatoon on December 21 that year. As a member of the Canadian Conference of Catholic Bishops (CCCB), Archbishop-elect Bolen has served on its Commission for Justice and Peace, of which he has been Chairman since 2014, and also as Co-Chair of the Canadian Anglican-Roman Catholic Theological Dialogue.

According to the CCCB 2016 Directory, the Archdiocese of Regina has 145 parishes and missions, with a Catholic population of 126,980, served by 79 diocesan priests, 19 priests who are members of institutes of consecrated life, three permanent deacons and 67 Religious Sisters and Brothers.