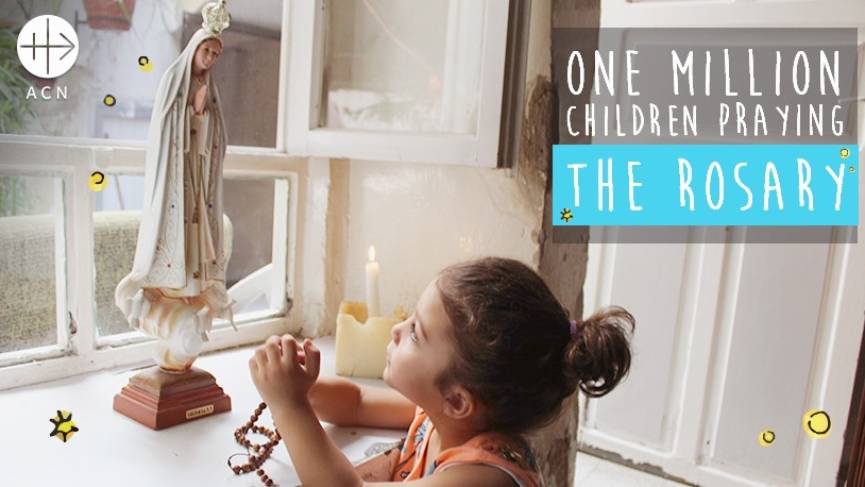 On Monday, October 18, the pontifical charity Aid to the Church in Need (ACN) is once again this year inviting parishes, kindergartens, schools and families to take part in the One Million Children Praying the Rosary campaign.

The aim of the prayer campaign is to promote peace and unity throughout the world. It is also a way to encourage children to seek help and support from God in times of need. In Canada, an online event will take place at 7 p.m. in both English and French. To register, please follow this link: onemillionchildren2021.eventbrite.ca.

“This year, we are also focusing on Mary's husband, Joseph, to whom the Pope has dedicated a Jubilee Year in 2021. He is an inspiring figure, especially in Canada, where he is the Patron Saint,” says Marie-Claude Lalonde, National Director of ACN Canada. “We need only to think of Saint Joseph's Oratory in Montreal, or the many religious communities named in his honour. Along with Mary, we can pray to him with great confidence.”

According to Ms. Lalonde, the reasons to participate are - unfortunately - more numerous than ever. "Our partners in Africa, Southeast Asia and the Middle East are in particular need of our support, as the men and women praying face discrimination and sustained religious persecution. Then there are all the refugees in the world, including those who have had to flee their countries because of the lack of religious freedom.”

"Hunger, poverty, corruption, wars and terror, lack of respect for human life and the destruction of creation affect countless people," says Cardinal Mauro Piacenza, International President of ACN. Since 2014, Pope Francis himself no longer hesitates to speak regularly of a "piecemeal Third World war," as conflicts have multiplied in many parts of the world. According to the United Nations, more than 80 million people are currently displaced or refugees, mainly due to war.

"In this context, inviting a million children to pray the rosary on the same day is certainly not for nothing," concludes Ms. Lalonde. Last year, the campaign ‘One Million Children Praying the Rosary’ beat all records, uniting children from 136 different countries together from countries such as Syria, Iraq, Mexico, Armenia, Papua New Guinea, Nigeria, the Democratic Republic of the Congo and Canada.

How It All Came to Be!

The origins of this prayer initiative date back to the year 2005 when a group of children were seen praying the Rosary at a local shrine in the Venezuelan capital Caracas, a few adults who witnessed the scene were reminded of the words of Padre Pio, who once said: ‘When a million children pray the Rosary, the world will change.’ Since then, the campaign has spread from city to country and across each continent—and become a worldwide phenomenon.