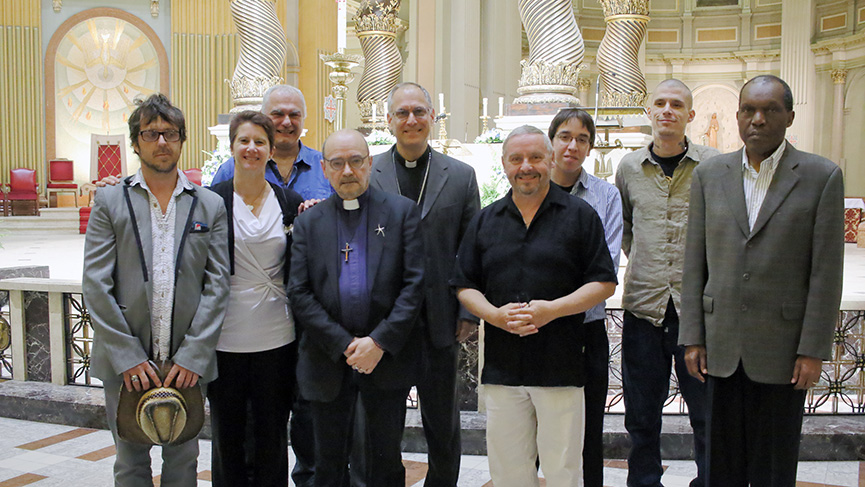 On the occasion of this year’s diocesan patronal feast day, Archbishop Lépine recognized the various charitable avenues undertaken, and still maintained, by members of religious communities and by people.

In addition to celebrating the diocesan patronal feast of the Visitation of the Blessed Virgin Mary on May 31, at Mary Queen of the World Cathedral, the Archbishop of Montreal also emphasized the 50th anniversary of the Association des supérieures majeures de Montréal, the 25th anniversary of social action ministry in parishes and the five-year quiet, but essential support of Notre-Dame de la rue to the homeless in Montreal.

“Do you feel discouraged at times?” asked Archbishop Lépine as an introduction to his homily. “Yes, probably,” was his reply. As a remedy, he suggested taking the time to revisit history, our own history since the foundation of Montreal, to witness how religious communities have shown generosity.

“The pathways leading to mutual aid and solidarity paved by these women are still in existence today,” said Archbishop Lépine. They helped serve those feeling discouraged or alone, and the sick and the needy.”
“For consecrated people, maintaining the flame of solidarity has always been important,” added the Archbishop, as he paid tribute to the communities represented by the Association des supérieures majeures de Montréal.

The social action ministry leaders in Montreal parishes have used them as role models over the last 25 years to establish relationships with community groups, to take part of major social issues and “to be close to the poor”.

Archbishop Lépine also recommended the following to the 200 participants present at the patronal feast of the Archdiocese of Montreal: “Get involved if only one day in your life in volunteering work.” Other people’s lives change when we serve them. Some even convert, he explained as he paid tribute, this time, to the volunteers of Notre-Dame-de-la-rue, some of them sitting in the front pew.

Before the ceremony, Father Claude Paradis had also thanked the 30 volunteers of Notre-Dame de la rue, the organization for the homeless he founded. “I couldn’t do anything without volunteers,” he revealed.

“Just yesterday, we met 150 homeless people. The needs are increasing. There number of homeless people is on the rise. This is an alarming situation.”

How can one explain this increase? “We come across more and more homeless people in the streets of Montreal, some with mental health issues, veterans and new drugs addicts.”

The youngest homeless are 14 or 15 years of age, said Father Paradis. “Cécile, one homeless women, is 92 years old. We gave her two bags of groceries.”

“During the Mass, the faces and names of those homeless people will be on my mind,” promised the founder of Notre-Dame-de-la-rue.

Catechesis that brings generations together
Pope with Roma community: A request for forgiveness in the footsteps of tradition

Pope with Roma community: A request for forgiveness in the footsteps of tradition