Feast Day Mass celebrating the Assumption of the Blessed Virgin Mary
14-08-2022
Episcopal Ordination of the most Reverend Frank LEO
12-08-2022
Canada’s Catholic Bishops Welcome Historic Visit by Pope Francis
29-07-2022
In cooperation with the Archdiocese of Montreal, communion will be offered during the broadcast of the Pope’s Mass at all Guzzo theatres
24-07-2022
Penance, Encounter, Hope - A Letter from Most Rev. Christian Lépine
22-07-2022 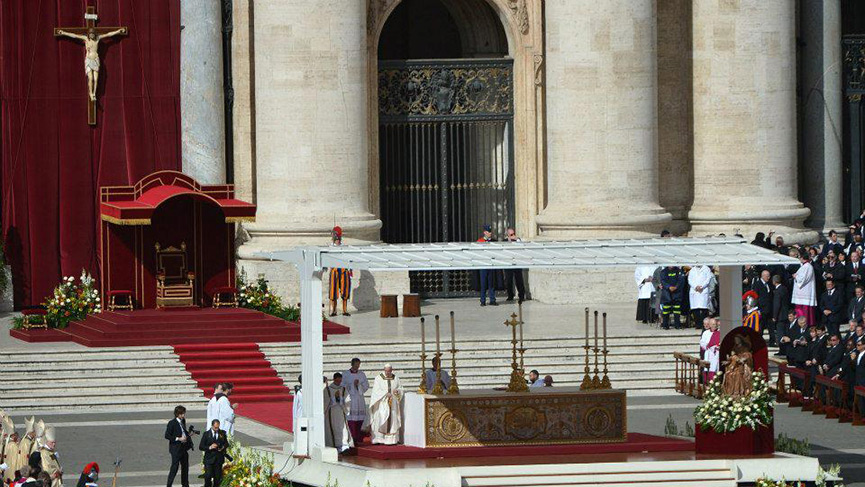 Pope Francis presides over the canonizations of Cardinal John Henry Newman, Sister Mariam Thresia, Sister Giuseppina Vannini, Sister Dulce Lopes Pontes, and Marguerite Bays. In his homily, the Pope reflects on the Gospel account of the lepers, and on the verbs “to cry out, to walk, to give thanks”.

In a sun-drenched St Peter’s Square, and before thousands of pilgrims coming from all over the world, Pope Francis proclaimed five new saints for the Church. In his homily, he reflected on Saint Luke’s Gospel account of Jesus healing the lepers. Theirs was a “journey of faith”, said the Pope. There are three steps in this journey, he added, all expressed in the actions of the lepers whom Jesus heals: “They cry out, they walk and they give thanks”.

The lepers “cry out”, said Pope Francis, both because of their disease and because they were excluded. Still, “they did not let themselves be paralyzed because they were shunned by society”, he said. “They cried out to God, who excludes no one”. Distances are shortened, loneliness is overcome, said the Pope, not by closing in on ourselves, but by crying out to the Lord, who “hears the cry of those who find themselves alone”. We too need to be healed, continued Pope Francis: “healed of our lack of confidence in ourselves, in life, in the future; healed of our fears and the vices that enslave us, of our introversion, our addictions and our attachment to games, money, television, mobile phones, to what other people think”. “The Lord sets our hearts free and heals them if only we ask Him”, said Pope Francis. The lepers call on Jesus by name, a name that means: “God saves”. To call someone by name is a sign of confidence, he said. “That is how faith grows, through confident, trusting prayer”, said the Pope. “Prayer is the door of faith; prayer is medicine for the heart”.

The second stage of faith is “to walk”, continued Pope Francis. There are several verbs of motion in today’s Gospel, he noted. “The lepers are not healed as they stand before Jesus”, only afterwards as they are walking “uphill” towards Jerusalem.  On the journey of life, that is how purification happens, said the Pope. “Faith calls for journey, a ‘going out’ from ourselves”, he said, leaving behind our “comforting certainties” and “safe harbours”. Faith increases by giving and by taking risks, added Pope Francis. “Faith advances with humble and practical steps”.

The Pope went on to stress how the lepers “move together”. The verbs in the Gospel are in the plural, he said. “Faith means walking together, never alone”, added Pope Francis. Yet, once healed, nine of the lepers go on their way, and only one turns back to give thanks. “The other nine, where are they?”, asks Jesus, as though He expects the one who returned to account for the other nine. We too are called to care for “those who have stopped walking, those who have lost their way”, said the Pope. “We are called to be guardians of our distant brothers and sisters”.

Giving thanks. This, said the Pope, is the final step. “Only to the one who thanked Him did Jesus say: ‘Your faith has saved you’”. The ultimate goal is not health or wellness, said Pope Francis, but the encounter with Jesus. “He alone frees us from evil and heals our hearts”, only He “can make life full and beautiful”. “The culmination of the journey of faith is to live a life of continual thanksgiving”, affirmed Pope Francis. “To give thanks is not a question of good manners or etiquette, it is a question of faith”, he said. “A grateful heart is one that remains young”, said the Pope. He reminded us to remember always to say thank you: “Those words are the simplest and most effective of all”, he said.

Noting that three of the new saints canonized this Sunday were religious women, the Pope said they show us that “the consecrated life is a journey of love to the existential peripheries”. Laywoman, Marguerite Bays, on the other hand, “speaks to us of the power of simple prayer, enduring patience and silent self-giving”.

Pope Francis concluded his homily by quoting Saint John Henry Newman, who described the holiness of daily life in these words: “The Christian has a deep, silent, hidden peace, which the world sees not... The Christian is cheerful, easy, kind, gentle, courteous, candid, unassuming; has no pretence... with so little that is unusual or striking in his bearing, that he may easily be taken at first sight for an ordinary man”

Let us ask God to be like that, said Pope Francis: “kindly lights” amid the encircling gloom.

One million children praying the rosary 2019
Equestrian Order of the Holy Sepulchre: the lieutenancies meet

Equestrian Order of the Holy Sepulchre: the lieutenancies meet