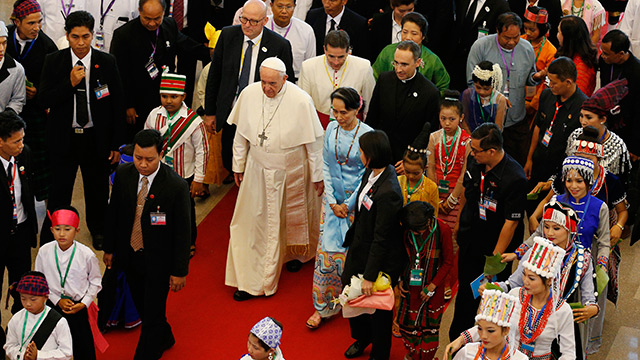 (Vatican Radio) In his first public discourse on Myanmar soil on Tuesday, Pope Francis encouraged the nation on the "arduous process of peacebuilding and national reconciliation" saying it can be achieved on only through a "commitment to justice and respect for human rights," a process in which religious leaders have a crucial role to play.

The Pope made the remark to Myanmar's state authorities, leaders of civil society and the diplomatic corps, after he was given a state welcome at the presidential palace in the country's new capital Nay Pyi Taw, some 320 km north of the former capital Yangon, where the Pope landed on Monday and where he will spend the rest of his stay in Myanmar.

‎Speaking in Italian, the Pope observed that according to age old wisdom, justice means a steadfast will to give ‎each person his due which forms the "basis of all true ‎and lasting peace." The denial of this caused the "tragic experience of the two world wars," the Pope said, that led to the establishment of the United Nations and the Universal Declaration ‎of Human ‎Rights as the basis for the international community's efforts to promote ‎justice, peace and human ‎development worldwide, and to resolve conflicts ‎through dialogue, not the use of force. The Pope said the presence of the diplomatic corps before him confirms Myanmar's commitment to uphold and pursue these foundational principles.

The Holy Father noted that the people of Myanmar have suffered much and continue to suffer from "civil conflict and hostilities that have ‎lasted ‎all ‎too long and created deep divisions." The Pope said that in its task of restoring peace, "the healing of ‎those ‎wounds must be a paramount political and spiritual ‎priority."

The Pope stressed that the future of the nation must be peace, a peace based on ‎respect for the dignity and rights of each member ‎of society, respect for each ‎ethnic group and its identity, respect for the rule of law, and respect for ‎a ‎democratic order that enables each individual and every group - none excluded - ‎to offer its ‎legitimate contribution to the common good.‎

In this great task of national reconciliation and integration, the Pope said, Myanmar's religious communities have a privileged role to play. He pointed out that "religious differences need not be a source of division and distrust, but ‎rather a force for unity, forgiveness, ‎tolerance and wise nation building." He said religions can help repair "the emotional, spiritual and psychological wounds of those who ‎have ‎suffered in the years of conflict," and "uproot the ‎causes of conflict, build bridges of dialogue, seek justice and be a ‎prophetic voice for all who suffer."

The Pope considered it a "great sign of hope" that leaders of the ‎various religious traditions in Myanmar are making efforts ‎to work together, in ‎a spirit of harmony and mutual respect, for peace, for helping the poor and ‎for ‎educating in authentic religious and human values. In seeking to build a culture ‎of encounter and ‎solidarity, they contribute to the common good and to laying the ‎indispensable moral foundations for a ‎future of hope and prosperity for coming ‎generations. ‎

Stressing that the future of Myanmar lies in the hands of young people, the Pope called on the nation to provide them with real opportunities for employment and a quality education, saying, it will be an investment that will yield a rich return, which is urgently needed for inter-geneartional justice. They need to be trained not only in technical fields but especially in ethical values, such as honesty, integrity and human solidarity that can consolidate democracy and the growth of unity and peace at every level. Intergenerational justice, the Pope pointed out, also demands that future ‎generations ‎inherit a natural environment unspoilt by human "greed and depredation."

Pope Francis said that the main purpose of his visit to Myanmar was to "pray with ‎the nation's small but fervent Catholic community, to confirm them ‎in their faith, ‎and to encourage them in their efforts to contribute to the good of the nation."  He said he also wanted to embrace the entire population of Myanmar and ‎to offer a word of ‎encouragement to all those who are working to build a just, ‎reconciled and inclusive social order.

Interfaith panel addresses “openness to others”
Together on a Mission!

Together on a Mission!