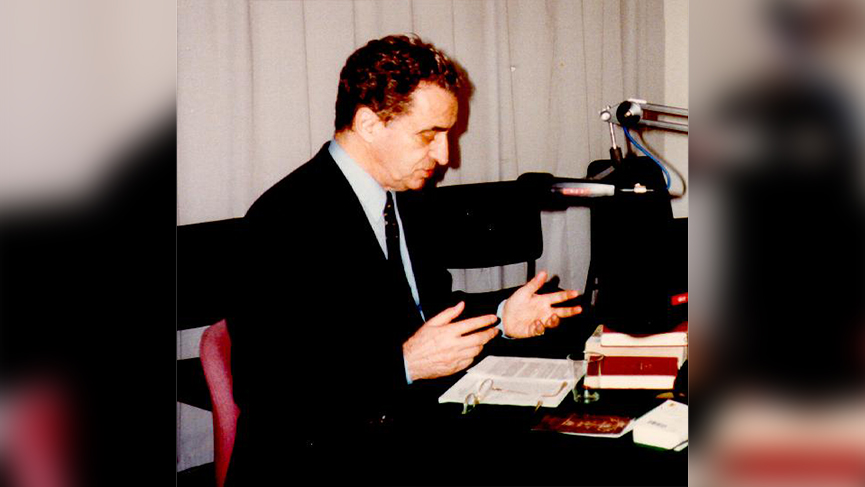 Raymond Beaugrand-Champagne died in Montreal on December 27, 2022, at the age of 96. He was best recognized as a producer for Radio-Canada over a span of some 30 years. He was responsible for the renowned weekly broadcast Rencontres, which ran from 1971 to 1990. He produced hundreds of interviews with personalities from the four corners of the globe, both believers and atheists. He invited me on his program, where I was interviewed twice by Marcel Brisebois (1933-2022): first on November 26, 1989, as professor of theology and writer, and the following week as specialist on the work of poet Patrice de La Tour du Pin.

We would meet thereafter, mainly at his apartment opposite the Grand Séminaire de Montréal, to talk about faith in Christ. He could be acerbic, and he was somewhat disillusioned - with Quebec, with the Church, and with certain half-hearted priests. I did not always agree with him, but he could entertain the opinions of others and myself without hiding his own. With his disarming frankness, the tone of his conversation could be brusque, but out of respect for his interlocutor he spoke what he believed to be the truth.

He overcame several crises of faith, by reading about the saints and above all through prayer. His faith in Christ became total and vibrant, without being intolerant. For example, he went to Communion every day and, in order to live the Gospel more fully, he adopted a child who had been orphaned, and through whom he learned to experience forgiveness and how to give of himself, until the latter’s tragic death at 40 in 1994.

One day, Roland Leclerc (1946-2003), well-known host of the broadcast Le Jour du Seigneur, invited Raymond on his program En toute amitié. Leclerc asked him point blank if he was a fanatic, to which he answered without missing a beat: Yes, but a fanatic with both feet on the ground. He then went on, asking how one could not be a fanatic, given the mere fact of existing, contemplating the beauty of Creation and the love of God as revealed in Jesus, the ultimate Living One. For him, fanaticism was an expression of joy, of the joy of believing, despite his life having been marked with periods of doubt and despair and profound loneliness.

After he retired from Radio-Canada, he went on to volunteer his expertise, hosting fully 1,137 interviews between the years 1995 and 2001 for the daytime program Rencontres spirituelles on Radio Ville-Marie. Here he discussed the lives of the saints and the blessed, as well as individuals of historical importance who strove for meaning in their lives. He regretted when he was obliged to leave that work. These broadcasts merging faith with culture are available on his website: https://dieuparminous.ca.

Following those starless nights during which his attachment to Christ was thrown into doubt, the light would always break forth even stronger in his soul. He at length accepted once and for all the mystery of the presence of Christ in the Eucharist. In his conferences, he testified to God’s love, for himself and for every person. He showed how this absolute love is revealed in the life and the message of the risen Jesus. He made an hour-long film on the “Holy Shroud of Turin,” which was well received in Paris at the 1979 international conference on religious broadcasting. The film was also shown subsequently in numerous other countries.

This adept of radio and television retained throughout his life a yearning for the monastic life. He entered the Benedictines at the age of 18 but stayed for only two years. In his death notice, it is requested that gifts in his memory be made to the Abbey of Saint-Benoît-du-Lac. The funeral service will be held January 21, 2023, at Mary Queen of the World Cathedral.

One day, I called him in hospital. He confided to me that he was distressed, sensing that God was not present, as though he were experiencing an inward communion with the sufferings of our world. Though reduced by old age, ailing and weak, he nevertheless continued to hope against hope, as Jesus did on the cross. His memory was no longer what it had been, but he had his faith, and in his humble and austere way, he shared his great love for Christ and the Church. He bore witness to this love in a brief autobiography from the early 2000s that appears on his website. He concludes it with the following words that could almost have been his testament. May he now rest in the peace of Christ, whom he so earnestly sought and loved.

“This world is waiting for us to proclaim what is called the Good News: which is the Love that God has for us and that saves us from ourselves. How can we discover this Love? We can learn about it by meditating on the Gospel. We can also learn about it through the lives of the saints. And we can learn to live through this Love by nourishing ourselves above all in the Eucharist. And then we arrive at the final decision: never again to offend or transgress against this infinite Love. We allow ourselves to be filled once and for all with the Spirit of God and to give our life for Him and for others. I love these words of the Carmelite Marie-Eugène de l’Enfant-Jésus:

“To become a saint, one must arrive at one’s limit, at an annihilation where there is only one thing that one can do: to hope in God. When we are reduced to abject poverty, we can only be saved by an act of faith in this very poverty, an act of hope that springs from a state of absolute deprivation.”

In short, everything is connected in the communion of saints, in what we call the mystical Body. This is understanding with certainty that God is among us, is in us, and that He loves us. All the rest is quite secondary.”

(Read the complete text on his website)
Read also a curriculum vitae of Raymond Beaugrand-Champagne on the Cursillos du Canada website:  https://www.cursillos.ca/indexfr.php
To learn more: En sa présence : autobiographie spirituelle (Artège/Novalis), includes an account of that period of my life.

In memory of Raymond Beaugrand-Champagne, the video from the Rencontres interview about Patrice de La Tour du Pin can be viewed on my YouTube channel. It was taped on December 3, 1989, when I was 37 years old.