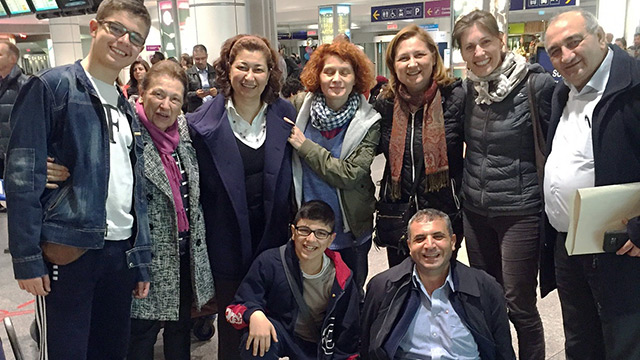 The first Syrian refugee family to arrive under the sponsorship of an English-language Catholic parish finally set foot on Canadian soil April 26.

The four-member Beirouty family, who arrived at Trudeau International Airport via Istanbul, is the second refugee group to be welcomed under the diocesan sponsorship program.

Within 24 hours, Bassam and Ghada Beirouty had applied for their medicare and social insurance cards, reports Dany Holland from St. Ignatius of Loyola Parish in N.D.G., which sponsored the family. The couple and their two adolescent sons, Sami and Fadi, also learned how the telephone and cable systems work as well as how to navigate public transportation.

"We gave them a day-long orientation on life in Canada," Holland reports, "covering everything from the Charter of Rights and Freedoms to social etiquette and finances."

Helping to find employment for Bassam, an accountant, and Ghada, a dentist, is the next challenge, underlines Holland, chair of the refugee committee and a parish warden.

"They are so grateful and look forward to be able to do for others as has been done for them," she says.

"They love the apartment and are amazed at how well furnished it is," Holland wrote to some 60 parish volunteers, who had served on the five committees quickly organized to prepare for the Beiroutys' arrival.

Two months ago, the west-end Montreal parish found itself scrambling to rent and set up an apartment for the family when they were informed that the Beiroutys would be arriving at the end of February. However, the government's accelerated process slowed in the meantime, so the parish remained on welcome-alert until last week.

"The February arrival date caught us by complete surprise," recalls Holland, "but the parish rallied." Sixty parishioners turned out on short notice Feb. 18 for an emergency meeting and formed five working committees.

They rented a four-and-a-half apartment in the Town of Mount Royal, overlooking the Metropolitan Expressway, near to where Ghada Beirouty's sister, Rima, lives. Her sister sponsored their 80-year-old mother and did not have the financial resources required under the federal refugee program to sponsor her sister's family as well. She turned to the Archdiocese of Montreal for help, who put them in touch with St. Ignatius.

Until three years ago, the Beirouty family had lived in Aleppo, but when a bomb exploded outside their apartment building, they were forced to leave, seeking refuge in a nearby town.

Aleppo, Syria's largest city, has been decimated by the civil war, where aerial bombings and house-to-house fighting occur daily. Rebel, government and various terrorist forces, including Islamic State, battle for control. Last October the Beiroutys fled to Lebanon, hoping to find a permanent home in Canada.

St. Ignatius decided last September to sponsor a refugee family after Archbishop Christian Lépine issued an appeal to all parishes. They have raised the estimated $32,000 needed to sponsor the family for their first year in Canada, $9,000 of which came from a benefit concert April 6, featuring the well-known St. Michael's Choir School from Toronto.

Three other families are being sponsored by English-language parishes; they include Ascension, St. John Brébeuf, and St. Veronica's together with Resurrection of Our Lord. To date, 23 Montreal parishes are involved in welcoming refugees.