The evening began with the Civil Remembrance Ceremony over the course of which commemorative wreaths were placed in the choir. Veteran Céline Charron laid the first wreath, while Bishop Lépine accompanied by Major General Guy Chapdelaine, Chaplain General of the Canadian Armed Forces, laid the second wreath. Guy Bérubé, vicar of the parish, recalled that 101 years earlier, ”at the 11th hour, on the 11th day, of the 11th month” the armistice was signed, ending four years of war. Before a centred and solemn crowd, the “Last Post” played on bugles followed by two minutes of silence and the elegy performed on bagpipes. The civil ceremony concluded with an Indigenous purification rite with feather and sage.

No less than 4,500 First Nations peoples in the fighting

In a packed church where additional chairs had to be added, mass began. To the tune of Beethoven’s “Ode to Joy” played on the organ by Laurent Martin, Bishop Lépine and all the priests present entered in procession. Father Guy Bérubé then took the floor to pay homage to all those who, “regular members of the army, conscripts or volunteers, embarked in fighting for our freedom.” He recalled the role of the military chaplains on the battlefield who administered the last spiritual care and who bore the heavy burden of comforting the families who grieved the loss of one of their own. He also highlighted the role of the 4,500 members of the First Nations. Indigenous soldiers, nurses and ordinary civilians made a major contribution to Canada’s war effort during the First World War. “We will never forget those who died for their country, for the peace and freedom that we enjoy today.”

After the proclamation of the Gospel, it was Major General Guy Chapdelaine who pronounced a homily full of hope. On this day of remembrance he recalled that God “is not the God of the dead but the God of the living. If today we are talking about death, it is to live better and to remember the thousands of Canadian women and men who gave their lives for us.” He then drew a parallel with the book of the martyrs of Israel and all those who died so as to not disown their beliefs and their faithfulness to their God. While it is difficult to leave those we love, reunions are always full of love and joy. Such is how death should be considered: as a future reunion.

“We do not leave forever (…) and Love will never pass.” He then invited the assembly to reflect upon what would be worth more than their own life. Undoubtedly, it is “the establishment of the reign of God, Love when hate reigns, Pardon when offense reigns: our future depends on our daily commitment.” Father Chapdelaine ended his homily by underscoring that to remember allowed one to “better live in the present, to learn from the past and to be inspired by it.” Take inspiration from the courage of the military to carry out “the fight for justice and for love.”

The Eucharistic celebration, full of humility and simplicity, was followed by a tribute concert by The Montreal Civic Band. The 50-minute concert with a mix of military sounds was punctuated by songs from the Buffalo Hat Singers, an impressive Indigenous musical group. 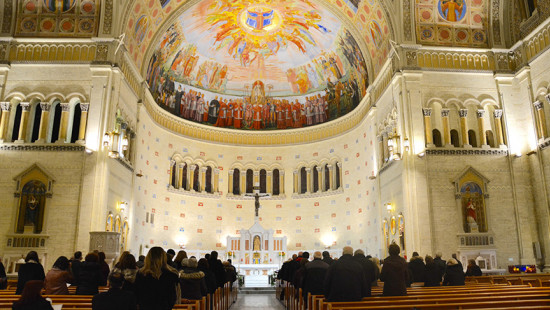