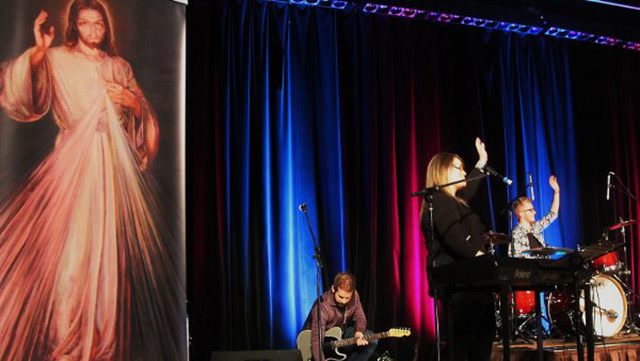 (VMO) Archbishop Christian Lepine welcomed more than 700 university students from across Canada to Rise Up 2015, a Catholic Christian Outreach conference which was held last week at the Queen Elizabeth hotel.

Lepine reminded the delegates that the city was founded in 1642 by young people with a mission like theirs. He encouraged them to take inspiration and repeat their work and spread Christianity all across Canada." During the conference the students will attend Bible workshops and other numerous activities which are designed to motivate them to spread the gospel and deepen their spiritual life.

The theme of the four day get together is Made for Greatness - inspired by Pope Benedict's observation that "Man is made for greatness, but his heart is too small for the greatness which is intended, so it needs to be stretched."

The conference opened Monday evening with a spirited performance by a pick-up Christian rock band followed by a rousing and inspirational address by John Stevens, pastoral life and new evangelization manager for the Archdiocese of Halifax.

Stephens is one of a number of guest speakers, including Dr. Andrew Bennett, Canada's Ambassador for Religious Freedom, Missionary Craig Johring who founded Hope for the Poor in Mexico City, and auxiliary Ottawa Bishop Christian Riesbeck, one of the youngest Roman Catholic bishops in Canada.

The evangelical outreach youth movement started at the University of Saskatchewan 27 years ago when André and Angèle Regnier began a charismatic group for Catholics. The Regnier's were also motivational speakers at the conference. Rise Up has expanded to thirteen universities across the country.