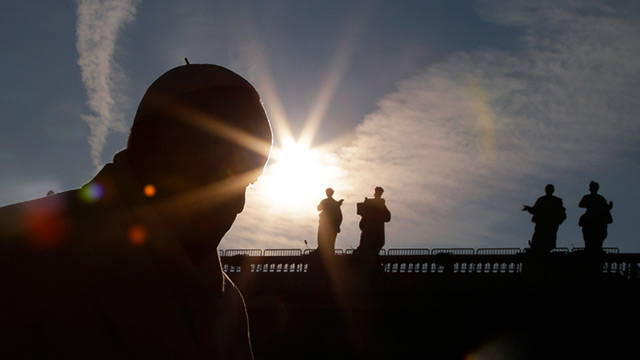 (CNS) At the Vatican and on five continents in 2015, Pope Francis continued to encourage and demonstrate a style of evangelization that emphasizes walking with people, listening to them and showing them God's mercy.

From the heart of the universal church to the heart of Africa, the pope showed how Christians with a joyful, living faith take calculated risks, engage in discernment and even debate, and resist the natural temptation to stay safe and cozy at home, letting everything move along like it always has.

On the 1,000th day of his pontificate, which began March 13, 2013, Pope Francis opened the Holy Door in St. Peter's Basilica and inaugurated the Year of Mercy to help Catholics "rediscover the infinite mercy of the Father, who welcomes everyone and goes out personally to encounter each of them," he said at Mass Dec. 8.

With his gestures, homilies and speeches, the first 33 months of his pontificate led toward that door in a way very much like the early years of St. John Paul II's energetic papacy prepared him to lead the church into the new millennium, calling Catholics to throw open the doors of their hearts to Christ.

Pope Francis' call, building on St. John Paul's, is for those who have experienced Christ's love to throw open the doors of their churches and their hearts to others, welcoming them in with gestures of tenderness.

He showed a willingness to take risks to spread the message when he decided to anticipate the Holy Year far from the Vatican. Ten days before the jubilee began at St. Peter's, he opened the Holy Door at the cathedral in violence-torn Bangui, Central African Republic, Nov. 29. Despite security concerns, the Vatican newspaper reported, he told the pilot flying him to Africa that if a landing in Bangui was not possible, "give me a parachute."

Mercy, the family and the environment topped the list of topics repeatedly and insistently discussed by Pope Francis and Catholic leaders across the globe in 2015.

None of the topics was treated just on the level of theory. Discussing concrete situations, though, set off a seemingly endless series of debates, including: Are there situations where justice and truth prevent some expressions of mercy and forgiveness? How far can the church go in acknowledging and welcoming families who do not fully live up to the church's ideal? Is climate change as real and as dangerous as most scientists say?

Pope Francis kept saying he welcomed the discussion and debate, that it was important and a sign that the church is alive. However, there also were times, particularly at the Synod of Bishops on the family in October, when he indicated that some of the rhetoric had crossed the line. He cautioned synod members against reading their differences of opinion in a "hermeneutic of conspiracy" and against using church teaching as "stones to hurl at others

The pope and synod affirmed repeatedly that God's ideal for the family is based on the marriage of one man and one woman, united for life and open to having children. Without acting as if every form of modern family life was equally valid, but also without "demonizing others," the pope said at the end of the gathering, the synod wanted "to embrace fully and courageously the goodness and mercy of God, who surpasses our human calculations and wants nothing other than that 'all would be saved.'"

Pope Francis, who was to celebrate his 79th birthday Dec. 17, said from the beginning of his pontificate that he would not be a globetrotter and did not particularly like to travel. In 2015, like previous years, his summer break was a "staycation" inside the Vatican and not the change of scenery in Castel Gandolfo his predecessors enjoyed.

Other than enjoying a restful August, though, he added more than 50,000 miles to his frequent-flyer account. He visited Sri Lanka and the Philippines in January; Bosnia-Herzegovina in June; Ecuador, Bolivia and Paraguay in July; Cuba and the United States in September; and Kenya, Uganda and the Central African Republic in late November.

Each trip featured visits to prisons, hospitals and soup kitchens or other places where Christian charity and mercy take their most concrete forms. He spoke in the halls of power, including at the United Nations and at the U.S. Congress, where he was the first pope to address a joint meeting of the Senate and House of Representatives. Whether soaked repeatedly by rain like he was in the Philippines or baked by the sun like in Cuba, he called on governments to put the needs and rights of their people first, and he called on Catholics to bend down with love and care to help society's most needy and defenseless members.

In the document department, the highlight of the year was the release in June of his much-anticipated encyclical on the environment, "Laudato Si'."

Although forcefully insisting on a need to mitigate climate change and clean up polluted land, air and water, Pope Francis' encyclical took a broader view of ecology and called people to treat all of creation -- including poor people -- with respect and concern because a lack of respect for creation is a lack of respect for God who created all that exists.

"The earth, our home, is beginning to look more and more like an immense pile of filth," the pope wrote in the document.

At the United Nations in New York, at U.N. offices in Nairobi and in speeches at the Vatican, Pope Francis urged world leaders meeting at the Paris Climate Conference in December to put the needs of the earth and its inhabitants -- both present and future -- before desires for political or financial gain. The world is facing a clear choice, he said: "either to improve or to destroy the environment."

Pope Francis also drew attention to internal church matters, though he always said the priority was on a lean, limber and listening church busy ministering to the world rather than preoccupied with shoring up its own structures. With his international Council of Cardinals, work continued toward reorganizing the Roman Curia and revamping spending and budgeting procedures to ensure responsibility and transparency.

But the process hit a major bump in the road with the leak of confidential documents on Vatican finances; the Vatican court ordered the arrest and trial of five people in the case, including the two Italian journalists who wrote books based on the leaked documents.

And if mercy must be at the heart of the church's message, "synodality" -- walking together -- must mark its internal relationships, he said. The themes of synodality and collegiality have been present since the beginning of Pope Francis' pontificate and featured in his exhortation, "Evangelii Gaudium," published in November 2013. But he developed the notions further this year, particularly when marking the 50th anniversary of the Synod of Bishops.

"The journey of synodality is the journey that God wants from his church in the third millennium," the pope said Oct. 17. "A synodal church is a listening church, aware that listening is more than hearing. It is a reciprocal listening in which each one has something to learn."

In a synodal church, he insisted, leadership is not about power, but about service. "We must never forget: for the disciples of Jesus -- yesterday, today and forever -- the only authority is the authority of service; the only power is the power of the cross," he said.

And the cross, he said opening the Year of Mercy, is the clearest sign of God's mercy, love and willingness to forgive sinners.

Rise Up 2015
Week of Prayer for Christian Unity