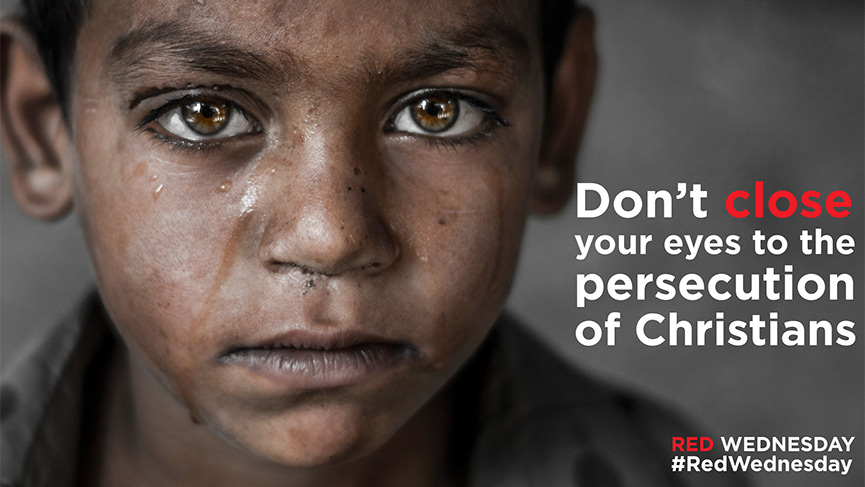 The facade of at least five major buildings across Canada will be illuminated in red this year – among them are Mary Queen of the World Cathedral in Montreal and St. Michael’s Cathedral in Toronto.

Today, Nov. 20, Aid to the Church in Need Canada is inviting all Canadians to participate in Red Wednesday events (#RedWednesday).  For the occasion, five stone monuments will be lit up in red:  Mary Queen of the World Cathedral in Montreal, Saint Michael’s Cathedral in Toronto, Saint Mary’s Cathedral in Calgary, the entrance of the Grand Seminaire de Montreal and the Hungarian Embassy in Ottawa located in the historic Chateau Birkett building.

In the diocese of Calgary, more than 80 activities are already planned. “I believe that more and more Canadians are aware of the problems connected to the lack of religious freedom in the world, and in particular, of the situation of over 327 million Christians living in  persecution stricken countries,” says Marie-Claude Lalonde, National Director of ACN Canada.

The events planned in Canada open an entire week of events taking place across the world until November 27.  In at least 15 countries, moments of prayer and information sessions have been organized along with monuments and buildings to be lit in red. To date it has been announced that there will be over 2,000 in Philippines and 120 in the United Kingdom in order to bring awareness to questions related to religious freedom and the persecution of Christians.

In Canada, there are several ways to offer a show of solidarity:

•    Participate in one of the planned events listed at this address acn-canada.org/red-wednesday/ or call : 1 (800)585-6333 or by email at info@acn-canada.org.
•    Find out more about the situation of Christians through the Persecuted and Forgotten? 2017-19 Report https://acn-canada.org/persecuted-and-forgotten/
•    Share the information on social media using the hashtag:  #RedWednesday
•    Wear red on November 20th
•    Pray for persecuted Christians around the world in small or large groups and for all who suffer because of a lack of religious freedom.

Among the many scheduled activities taking place Canada-wide we would like to highlight a few:

Novena for the Church and its work towards a missionary transformation