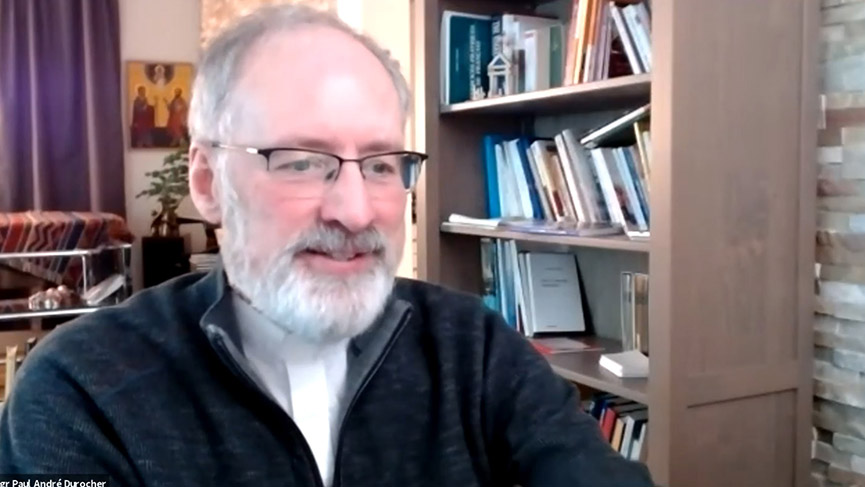 Continuing in the vein in which he began at the November 21 meeting, Archbishop Paul André Durocher of Gatineau held a videoconference on the evening of Wednesday, February 3 that drew 250 participants to hear him speak on transformational leadership in the Church.

Echoing a number of the concepts that had been presented to us by Brett Powell a while earlier, Archbishop Durocher described five skills that the motivating leader possesses, drawing parallels with the attitude of Jesus in the Gospels. By taking Christ as a model and ‘‘conforming’’ to Him, he believes, inspired by Romans 8:11, that ‘‘if the Spirit who made Jesus a leader lives in you, the one who made Jesus a leader will make these same skills flourish in you through the same Spirit who lives in you.’’

The skills of the leader:

Although all these skills begin through work on oneself, Archbishop Durocher gave us numerous pointers for looking at the dynamics within our pastoral teams and communities. Along the course of our Church’s missionary transformation efforts, he drew attention to certain pitfalls: for instance, the tendency whereby, in order to avoid making necessary transformations, we seek to control anything that could contribute to demotivating those around us.

Everybody will say that they recognize how changes are essential, but that they themselves are too old or don’t have the energy left to devote to such changes. Here Archbishop Durocher tells us that there are many levels of potential involvement: getting informed about prospects for change; informing those around us; encouraging others to get involved if we cannot do so ourselves, etc. In short, a host of modest ways to motivate people to participate, rather than discouraging them.

Archbishop Durocher reiterated several times that the good leader puts him- or herself at the service of others and seeks to bring out the talents and abilities of others. What can be accomplished by oneself? Is it not the role of the Church to stand as a community and to act together in communion? In closing the meeting, Archbishop Durocher left us with this last word of wisdom to reconcile the impatient and the activists: ‘‘There are those who sow and those who reap.’’