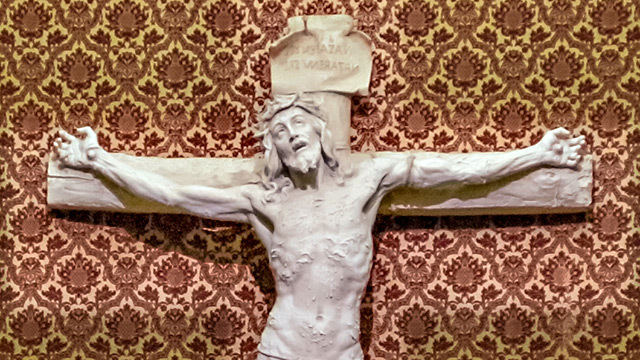 The White Cross at Mary Queen of the World Cathedral is truly something special to see. Imposing, moving, and of rare beauty, it invites visitors to contemplate and meditate.

For these reasons, the Archbishop of Montreal, Most Reverend Christian Lépine, has requested that this crucifix be made accessible to everyone.

On the occasion of the Year of Mercy, a four-step journey is proposed to visitors and pilgrims who come to cross the threshold of the Cathedral's "Door of Mercy." The White Cross is the second step: "To meditate on "the Source of Mercy," the Passion and Death of Christ, which brought us Salvation."

"We have in our church a beautiful representation of Christ on a cross and no one knows about it. What can we do to make it accessible?" Most Reverend Lépine asked Caroline Tanguay, assistant to the vicar general for the heritage and religious art on the diocesan territory of Montreal. "We had just had it restored in its entirety (by Gina Garcia, conservator), and we were pondering the idea of changing its location, for where it was, and always had been- behind glass doors, in the small chapel dedicated to the Sacrament of Baptism-rendered it inaccessible at all times. Most Rev. Lépine decided that the crucifix should remain there, but that the doors should be opened."

According to Caroline Tanguay, the White Cross is one of the most important pieces of religious sculpture in Quebec: "Christ is beautifully represented, and in a very moving way... It is the very face of mercy. The most beautiful part of the sculpture is his face."

This sculpture, by Louis-Philippe Hébert, ordered by Bishop Ignace Bourget, and completed in 1907, is all the more unsettling because of its human size (309cmX195.5cmX46cm). Gina Garcia, after spending 10-hour days on its restoration, removing dust and cleaning it with a cotton swab, said that it was very well sculpted: the ribs, muscles, wounds... It is entirely proportional.

Louis-Philippe Hébert-a contemporary of Olindo Gratton, who had sculpted the 13 patron saints on the Cathedral's facade (representing the 12 apostles on the facade of St. Peter's Basilica in Rome)-is better known for his sculptures outside the Cathedral, like the one of Bishop Bourget, for example.

The Cathedral's "Door of Mercy" is made of wood, but painted in bronze to resemble the one at St. Peter's in Rome.

Learn more on the Year of Mercy