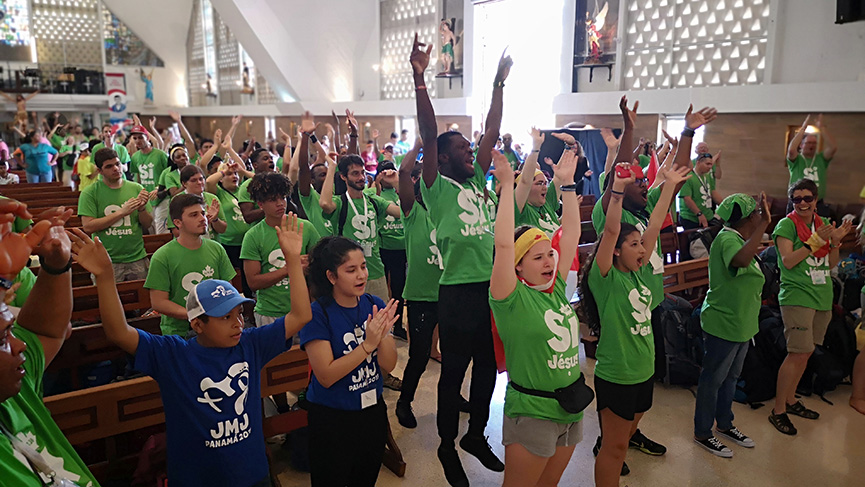 The 34th Edition of the WYD held in Panama in January 2019 is now behind us. After living extraordinary moments of kinship, sharing and communion, the pilgrims are back home, empowered and ready to pass on the joy of the Gospel to their own communities!

“I do not know yet which fruits will grow out of this experience, but I already feel I was fed. I lived, there, the joy of the Gospel in a practical way!”

Interviewed right before his return flight, Emmanuel Langlois from the diocese of Sherbrooke did not regret attending the WYD:
“I really loved the catechetical teachings given by the various bishops and the moments of prayers with Pope Francis. I think all the youth that was there got a lot out of this faith-based experience.”

As for Jade, from the diocese of Saint-Hyacinthe, the contrast between the host country and the situation in Quebec is stunning. “Here, in Quebec, we sometimes feel we are dealing with a declining Church, whereas in Panama it is rather the opposite. We experienced a joyful and festive Living Church!”

For many pilgrims, the WYD began by spending several days in the dioceses of Panama. Sheltered in private homes, this cultural exchange enabled them to deeply explore the local culture, to enjoy traditional folkloric dances, to taste local dishes … and to attend festive Masses!

“The way people we lived with welcomed us really touched me. Maybe they did not have much to live on and their simple life is something we are not really used to here, but they offered us all they had joyfully… and it was very touching!” said Jade.

Following this unique time of encounter between various nations, the pilgrims were also expected to be in the great capital, Panama City, as part of the official program!

True to their exceptional friendly reception, the many city volunteers were ready to welcome hundreds of thousands of pilgrims from all over the world to celebrate their faith with.

Since the Pope’s arrival was expected by the end of the week, the organizers had planned several activities for the youth: catechetical teachings in several languages in the morning, followed by a Mass, a theme park with music concerts, a vocational fair, a space for confessions, and even a friendly soccer tournament!

It was also an opportunity for all Canadians who were there to gather and celebrate together. A few hundred pilgrims were part of this traditional gathering of Canadians who sang, danced and prayed together in the company of the Canadian bishops who were at the WYD.

“Looking at all these young people gathered here to celebrate their faith, in this manner, is wonderful! We are all so happy to be able to be part of this moment!” said Rachel, from the diocese of Vancouver.

The Bishops and the Youth

Several bishops of Quebec and Canada were also present at the WYD alongside the young pilgrims. Among them was Archbishop Christian Lépine of the diocese of Montreal, who gave a catechetical teaching to the French-speaking pilgrims.

“Being part of a WYD means giving oneself the opportunity to experiment an encounter with Christ, along with the Pope and other young people from all over the world, in an atmosphere of recollection and celebration! The WYD is the ideal place to feel one is not alone in one’s faith and to get to exchange with other young people from all continents,” explained Archbishop Lépine before going to Panama.

The time for big gatherings finally came. The Welcoming ceremony for the Pope, the Way of the Cross, the Vigil and the final Mass. Great moments of communion between the Holy Father and hundreds of thousands of pilgrims who came to him.

“Dear young people, you are not the future of God, but his hour. He welcomes you and sends you in your communities and cities to seek your grandparents and elders, so that you can stand and speak with them to create the dream the Lord had in mind for you.”

At the end of the final Mass, the Holy Father said a prayer to Mother Mary, the central figure of the WYD, entrusting to her the whole youth who took part of the WYD in Panama. He thanked the young people whose faith and joy rocked “Panama, America and the whole world.” He then added that young people are not only the future of the Church, but its present.

The next gathering of the WYD was then announced through a cheering crowd: Lisbon, Portugal, in 2022!


Let us bet that a lot of young people will soon practise their Portuguese in view of this next trip! And if you cannot wait any longer, please come and cheer young Montrealers at the next diocesan WYD, which will be held on April 13!

Protocol following the recommendations of the 2018 guidelines on Protecting Minors released by the CCCB
Saint Joseph: The Saint who has taught me how to love in silence

Saint Joseph: The Saint who has taught me how to love in silence