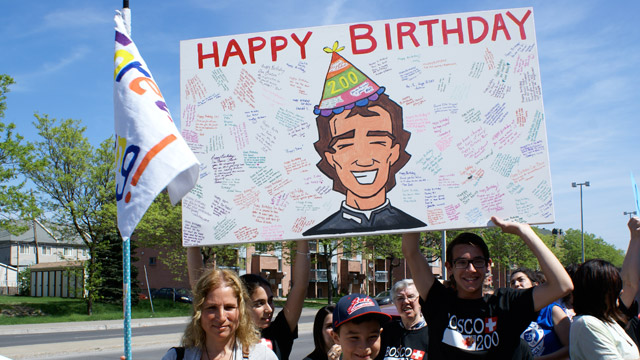 On Monday, May 19, the Salesian Youth Centre (Rivière-des-Prairies) celebrated in the sunshine the bicentennial of Saint Don Bosco's birth with laughter, song, and games.

Almost 200 people, mostly young, got together to celebrate Don Bosco (1815-1888), a holy Italian priest who devoted his life to the education of young people and who founded the Society of Saint Francis de Sales (1854), more commonly known as the Salesian Congregation.

Inspired by Don Bosco's "oratory," a place of games and prayer created by the saint to welcome the city's idle youth, the Salesian Youth Centre, referred to as the "Patro" in the language of the Salesians, is ran by Father Richard Authier and the Salesian Sisters.

"Our main clientele is the 3rd and 4th generation of children of Italian immigrants who attend English school. Our mission is to give young people a chance to develop their personality and their faith through various activities such as games, sports, and leisure. During the year, almost 400 young people come for tutoring, leadership camps, and prayer. During the summer, 500 young people register for our day camp, 'Happy Days.'"

Approximately fifty extremely dynamic and devoted young counselors are involved at the Salesian Youth Centre, and it is they who, for the most part, organized and hosted this day of celebration by putting on performances, each more hilarious than the next.

The celebration began early in the morning and continued until late afternoon. At lunchtime, we formed a long procession that led to the parish church where we celebrated the Eucharist.

Most Reverend Christian Lépine presided at the Mass at Marie-Auxiliatrice Church. The youth prepared joyful entertainment to accompany the Mass: a short production about Don Bosco, songs of praise set to the music of Chris Tomlin, king of Christian rock, all ending with a big dance.

The Archbishop of Montreal did not pass up the opportunity to point out that children have an advantage over adults, "for they know that they are still growing and that they are so humble," making a joke in reference to the Gospel of Matthew.

The Diocesan Merit will be Awarded on Friday