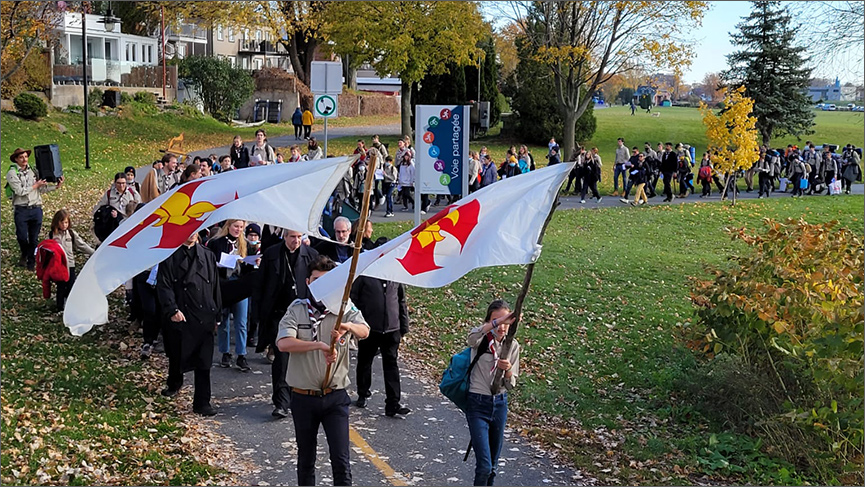 Procession to the Basilica

On Sunday, November 7, in Varennes, Archbishop Lépine met with the 38th Saint-Jean-Baptiste Scout Pack (Montreal) to celebrate a Mass concluding their weekend pilgrimage to the Sanctuary of Saint Marguerite d'Youville.

Beginning on Saturday, the older children (Guides and Scouts) had started out on their pilgrimage to the Basilica. On Sunday, the younger ones (Cubs) and their parents joined up for a five kilometre walk to begin the year under the Lord’s watch and in the presence of Archbishop Lépine.

About noon, the Cubs, Guides and Scouts and their parents all assembled at a short distance from the Basilica for a picnic lunch. They were joined by Archbishop Lépine, who took advantage of the occasion to meet with each group and converse with their leaders.

Everyone had the chance to explain their pilgrimage process to him

The youngest (8 to 11) were asked to choose a person for whom they were undertaking the walk and saying their prayers: "They could choose a person who was ill or who had passed on, someone elderly or lonely, or simply someone who was in need of prayer," explained a leader in charge of the Cub Scout girls (8-11). During their walk, the children were encouraged to enjoy the beauty of nature, appreciating the moments of silence, observing their surroundings and strengthening their trust in God.

For the older youngsters (12 to 17), activities included meditating on the rosary and reading a Gospel passage. "When we walk, it makes our bodies move, but it also moves our hearts and souls," reads the little booklet given to each youngster for the pilgrimage. 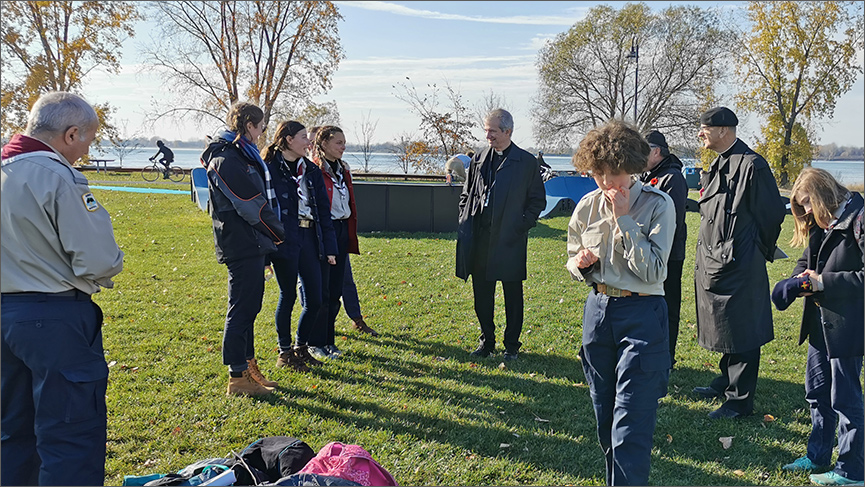 Archbishop Lépine talking with Blandine, Jeanne and Adèle, company leaders (for Guides 12 to 17)

Parents too had their own activities to finish before arriving at the Basilica: rosary, songs, readings and prayers. Everyone was very glad to be back together after two years of missing out on the scouting experience, which had been badly impacted by the pandemic.

After lunch, the group walked together towards the Basilica, praying and singing as they followed Archbishop Lépine and the ‘Unilysé,’ the Scouting association’s standard. Passers-by watched in amazement and walked away smiling to see these young people singing the glory of God at the tops of their voices.

Aline, who volunteers at the Sanctuary, declared in admiration, "It has been such a long time since I saw so many people in the Basilica - so many young people - and heard such beautiful songs!" And indeed, throughout the Mass, the Basilica was filled with the voices of the youngsters and of their parents raised in song with the music of two flutes and a guitar accompanying them.

After a brief word of welcome from Claire-Marie and François Sabbagh, the young couple who lead the Scout pack, Louise Girard spoke to those assembled about the story of St. Marguerite d'Youville. Born in Varennes, she was canonized in 1990 by Pope John Paul II for her devotion and for her compassion for the most vulnerable. The younger children were impressed to learn that her tomb was in this same church, while the older children realized that she represents an example to be followed, having faith in God's goodness and trusting in his justice for all.

Following the proclamation of the Gospel by parish priest and rector of the Basilica of Sainte Anne de Varennes Father Mario Desrosiers, Archbishop Lépine addressed the Scouts. He began by thanking the leaders and parents for "their generosity and dedication," before speaking about the Baden-Powell Scouts' flag. "I would be proud to have a flag like yours showing the cross and the fleur-de-lys. The cross is God, who is Love, embracing all humanity, big and small (...) the fleur-de-lys is purity, and having a pure heart is so precious."

Archbishop Lépine then asked the group to think reflect what could help us have a pure heart, help us "grow and be purified." He emphasized two important points for all the Scouts present: first, "having an inner code to live up to every day, and that code for you is the Scouting code." The second "is your Scouts’ salute (the three middle fingers of the right hand extended and the thumb crossing the little finger), with the strongest protecting the weakest and the weakest helping the strongest. When you receive the call to purity, you receive a strength made to dwell within you, regardless of the circumstances."

Taking St. Marguerite d'Youville as an example, Archbishop Lepine urged the scouts to learn to ground themselves in Christ. "He will give you his support, your code of conduct, your faith in Providence." He concluded by stressing the importance of the family; "With God, your family and the Scouting family, you have everything you need to grow and become a saint!"

The Mass ended with the singing of the Scout’s Promise which echoed beyond the doors of the Basilica. Aline the volunteer went home with "her head and heart filled with beautiful things: it was very moving to see so many young people and children so involved and disciplined and prayerful. The choir and the instruments were thrilling." For his part, Guy Trad, a member of the High Command for over 10 years, having been a member of the team who revived the Scouting group, smiled proudly as he reflected, "Our Archbishop has given us his encouragement. After this first pilgrimage, this first step, he has encouraged us to take the second step. And always be prepared!"

At the end of the Mass, the Cubs, Guides and Scouts returned to their families, all satisfied with this beautiful day that holds so much promise for the rest of the Scouting year.

Dismissal, exit to the Promise Song