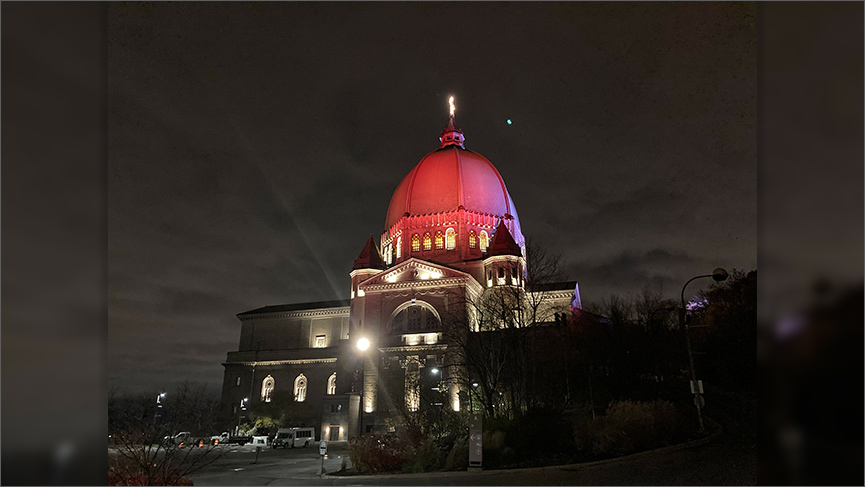 It's confirmed: tonight and tomorrow (November 16 and 17), the dome of St. Joseph's Oratory on Mount Royal in Montreal will be illuminated in red to mark Red Wednesday, an international event that brings together 15 of the 23 national offices of Aid to the Church in Need (ACN) and aims to raise awareness of the issue of persecution of Christians. The Oratory is the most important place of pilgrimage dedicated to St. Joseph in the world.

"I am delighted that Saint Joseph's Oratory is showing such solidarity with persecuted Christians: thank you," says Marie-Claude Lalonde, National Director of ACN Canada.
"Two major shrines are joining us this year for the first time: Saint Joseph's Oratory of Mount Royal and Cap-de-la-Madeleine. Little by little, Red Wednesday is becoming a must in the country," she says.

These two shrines are part of the National Shrines of Canada, designated by the Canadian Conference of Catholic Bishops (CCCB). Saint Joseph's Oratory of Mount Royal attracts an average of nearly two million people a year. It is also the largest church in Canada.

To date, seven locations have confirmed the illumination of their facades. They join a series of prestigious monuments around the world, including the Sacré-Coeur du Montmartre in Paris, the statue of Christ the Redeemer in Rio de Janeiro and the British Parliament in London.

For more information on Red Wednesday 2021 activities in Canada, visit the home page.

130 Scouts at the Basilica of Sainte-Anne de Varennes