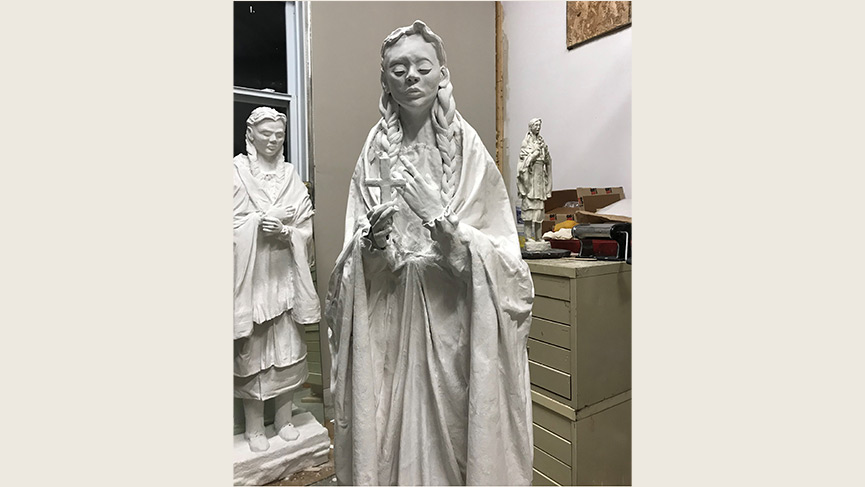 Archbishop Lépine will be accompanied by Father Vincent Esprit, C.M.F., pastor of the Shrine of Kahnawake, and Father Alain Vaillancourt, pastor of the Cathedral.  Mr. Roger Twance, Coordinator of Saint Kateri au centre-ville, will host the event. The statue of Saint Kateri, sculpted by MC Snow of Kahnawake and funded by personal donations and the order of consecrated virgins, will stand beside the statue of Saint Anne on the left side of the nave. The artist will present the work as part of the celebration.

The date chosen for the blessing and installation ceremony is the National Day for Truth and Reconciliation, a federal statutory holiday.

"As we reflect on the residential schools, the grieving families and our Aboriginal brothers and sisters in Canada, Quebec and Greater Montreal, we pray for increasing dialogue and the restoration of trust, so that we may better contribute to building a society free of discrimination and respectful of the life and dignity of every human being," said Archbishop Lépine.

Since only 250 persons are permitted inside the Cathedral, the celebration will also be livestreamed on the diocesan YouTube channel: Catholic Church of Montreal.

Kateri Tekakwitha was born in 1656 at Ossernenon (now Auriesville, NY) to an Anichinaabeg (Algonquin) mother and a Kanien'kehá: ka (Mohawk) chief.  She was four years old when her parents and brother died of smallpox. She also contracted the disease, which left her scarred and nearly blind.

Kateri was 10 years old when her village moved to Caughnawaga (now Fonda, NY).  In 1667, this village was visited by the Jesuit missionary fathers Frémin, Bruyas and Pierron.  It was through them that Kateri was first introduced to the Christian religion. When she was 18 years old, Father Jacques de Lamberville arrived to take over the mission in her village. Her uncle, though reluctant, gave her permission to be baptized, provided that she would not leave the village. After her baptism, Kateri’s pious life was led in devotion to the faith and spending hours in prayer and fashioning crosses out of branches. She refused to marry, maintaining that she was the bride of God and in her heart no man could take the place of the Lord. Two years after her baptism, Kateri left for the St. Francis-Xavier Mission, a Christian kanien'kehá village in Kahnawake on Montreal’s south shore.

Here, on Christmas Day, 1677, she made her first communion. She also later  took a vow of perpetual virginity on the Feast of the Annunciation in 1679. Everyone in Kahnawake knew of Kateri's faith and holiness. She taught prayers to children, cared for the elderly and the sick, and she would often attend Mass at sunrise and sunset.

But Kateri's health was deteriorating. She succumbed to tuberculosis on April 17, 1680, shortly after her 24th birthday and was buried at St. Francis Xavier Mission. Her last words were "Jesos konoronkwa" (Jesus, I love you). Witnesses report that within minutes of her death, the smallpox scars had disappeared from her face, which became radiant with beauty.