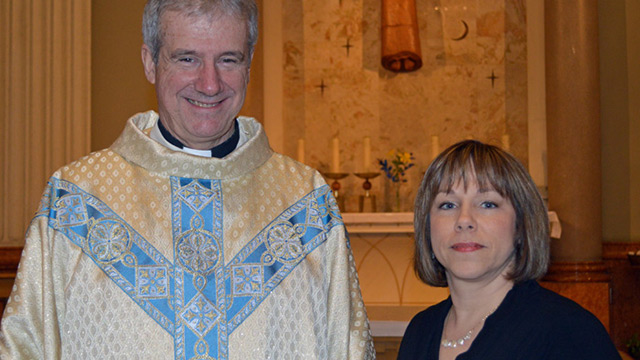 Only a few hours after having presided at the funeral of René Angélil, Most Reverend Christian Lépine presided at a Mass for persecuted Christians in the Middle-Eastfor the second time in as many years.

More than 150 people gathered at Mary Queen of the World Cathedral to show their support for the members of their faith community that are suffering because of their faith.

Most Reverend Lépine was surrounded by a dozen concelebrants, including Bishop Marwan Tabet, the Maronite Eparch of Canada, and Father Pierangelo Paternieri, Episcopal Vicar for the diocesan cultural communities. The celebration was organized in collaboration with Aid to the Church in Need (ACN).

In a short presentation, Marie-Claude Lalonde, National Director at ACN Canada, stated, "there are currently 200 million Christians in the world who cannot freely practice their faith. They can be found on almost every continent: Asia, Africa, South America, and even Europe."

Praying for the Torturers

This persecution has many faces. Marie-Claude Lalonde said, "Christians are victims of administrative constraints, of workplace discrimination; they do not have the same rights as non-Christians, and are imprisoned and sometimes killed because of their faith. Yet, religious freedom is a fundamental right recognized by the UN in the Universal Declaration of Human Rights."

According to her, "it is our duty as Christians to speak out against the violence that Christians are victims of. It is our responsibility to make their situation known and to pray for them. In this year of mercy, I ask that you to pray for their torturers. Who knows what could happen if only one of them were to convert... like Saint Paul had?"

In his homily, Most Reverend Lépine expressed his amazement at the faith of persecuted Christians. "I am always astonished by their faith in Jesus Christ. It gives them the strength to keep going and to forgive. Their hearts remain open to love. They are pacified."

During an interview with Présence on the occasion of this Mass, Most Reverend Christian Lépine, a member of ACN's International Board of Directors, pointed out that in his exchanges with Christians in the Middle East, many of them have expressed great pain caused by the exile of their brothers and sisters of the faith. "It is therefore important to pray so that Christians may remain in the Middle East, where they have been living for almost two millenniums."

The Power of Prayer

In an interview, Marie-Claude Lalonde also insisted on the effects of prayer on those who are experiencing persecution in their country. "I have a friend in Bagdad. I was compelled by a sense of duty to email him, telling him that we will organize a Mass in favour of persecuted Christians and that we will pray for him and for his community. You cannot imagine how much energy this gives them. To know that we are praying for them gives them the strength to keep going. I am convinced that even when they do not know we are praying for them, our prayers have an affect on them."

During this Mass, which, in the words of Most Reverend Lépine, was "modest and simple," The Saint-Éphrem Parish Choir sang for the assembly. The choir, from Montreal's Syriac Catholic community, sang liturgical hymns in Arabic and French. Maghi Borgi, the choir's director, said that it is made up of people from the Lebanese, Syrian, and Iraqi communities. "Currently, the choir has approximately twenty singers, but with the wave of refugees, our numbers are growing. Several were members of a choir in their country. Despite everything, they still wish to sing! It's important to them." Maghi Borgi herself was born in Lebanon to a Syrian father and Lebanese mother.

Volunteers Killed in Burkina Faso Had Strong Ties to Nuns
Pope Francis: 'Lent is a favourable time for conversion'

Pope Francis: 'Lent is a favourable time for conversion'