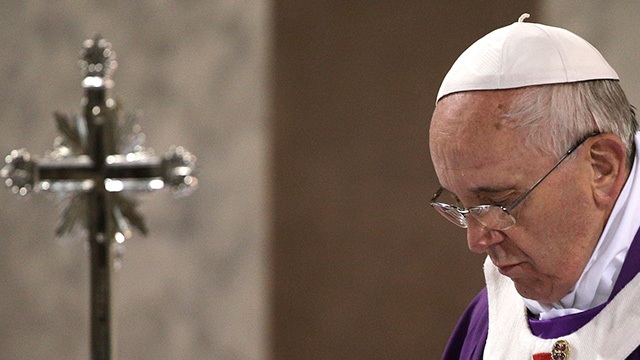 (Vatican Radio) Pope Francis is asking us to live this Lenten period as a favourable time for conversion during the Extraordinary Jubilee of Mercy.

In his message for Lent entitled "I desire mercy and not sacrifice. The works of mercy on the road of the Jubilee" the Pope reiterates the importance of the corporal and spiritual works of mercy and condemns the attitude and actions of  the proud, the powerful and the wealthy who refuse to open the doors of their hearts to God and to the poor.

By reflecting upon and putting into practice the corporal and spiritual works of mercy - Pope Francis says - Christians will be able to reawaken their consciences which too often have grown dull in the face of poverty.

In his Message for a special Lenten period which takes place this year within the Extraordinary Jubilee of Mercy, the Pope says that it is a season to be lived more intensely as a privileged moment to celebrate and experience the transforming miracle of divine Mercy.

Pointing out that poor have a special place at the heart of the Gospel, he warns of  the "blindness" and of the  "illusion of omnipotence" which often afflicts the rich and powerful who close their hearts to the poor and end up themselves - he says - being the poorest of the poor.

This illusion of omnipotence, the Pope continues - can "likewise take social and political forms as shown by the totalitarian systems of the twentieth century, and in our day by the ideologies of monopolizing thought and techno-science which would make God irrelevant and reduce man to raw material to be exploited".

The powerful message - presented on Tuesday morning in the Vatican Press Office - calls on believers to practice the works of mercy and to listen to God's Word.

"Let us not waste this season of Lent - Pope Francis says - so favourable a time for conversion!".

The Church of Montreal Supports Persecuted Christians
Teaching on theology of the body unifies Christians?

Teaching on theology of the body unifies Christians?