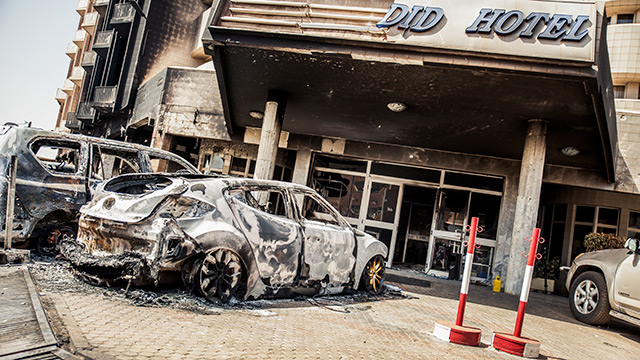 (Présence/CNS) Canada's Sisters of Our Lady of Perpetual Help were shaken in the aftermath of the terrorist attack in Ouagadougou, Burkina Faso, Jan. 15 in which 29 people were killed, including six humanitarian workers from Quebec.

Attackers linked to al-Qaida stormed two hotels and two restaurants mostly patronized by Westerners. Four members of one family were killed, including Yves Carrier, his wife Gladys Chamberland and their children Maude, 37, and Charlelie, 21, as were two other aid workers, Suzanne Bernier and Louis Chabot.

Sister Gaetane Guillemette, general secretary of the order, was saddened by the tragedy.

"We're heart-struck and distressed about what just happened," she said, describing how the congregation heard the news the evening of Jan. 15.

The volunteers arrived Dec. 24, participating through Casira, a nongovernmental organization that recruits people interested in offering their time and service to programs in countries around the world. Carrier had been to Burkina Faso several times in recent years.

"We knew them very well," Sister Gaetane said. "That group shared strong bonds of friendship. Some of them spent eight days in our house in Mani, to help the local population."
The Sisters of Our Lady of Perpetual Help has ministries in nine countries including three in Africa. The congregation also runs an internship program that allows laypeople to assist in missionary work in Africa.

The attack does not jeopardize the congregation's humanitarian projects, she added.

"We'll never give up, nor stop to promote those internships. We'll make sure that when they work with us, all the necessary precautions are taken. The main problem in that our humanitarian workers also wish to visit the capital cities and other public places. Alas, it's precisely those places that are targeted by the jihadists," Sister Gaetane said.

"Is there a sole place on Earth that isn't dangerous nowadays?" she asked.

The director of Quebec's Association of International Cooperation Organizations, which includes Casira as a member, also expressed sorrow over the loss of lives.

"We've contacted the families of the victims, as well as (Casira) to assure them of our full support," Michele Asselin said.

She admitted that international cooperation is a risky business, especially when humanitarian organizations operate in countries prone to violence.

"There's no such thing as a risk-free scenario. (On Jan. 15), it was Ouagadougou. A few weeks ago, it was Paris. There are risky situations everywhere on Earth," Asselin said.

"Humanitarian workers wishing to take part in projects in risky-zones or war-torn countries are properly briefed and educated, so they're prepared for the reality on the ground," she explained. "They understand that they need to respect some safety measures, such as refraining from visiting public spaces or taking part in public activities. We also ask them to avoid going out at night, after dusk. It's not always easy to comply with such rules, but they're meant to assure the safety of the humanitarian workers."

"We'll closely monitor what's happening in Burkina Faso," Asselin added, saying, she believed the bonds of solidarity that tie "our humanitarian organizations with the people of that country" will prevail.