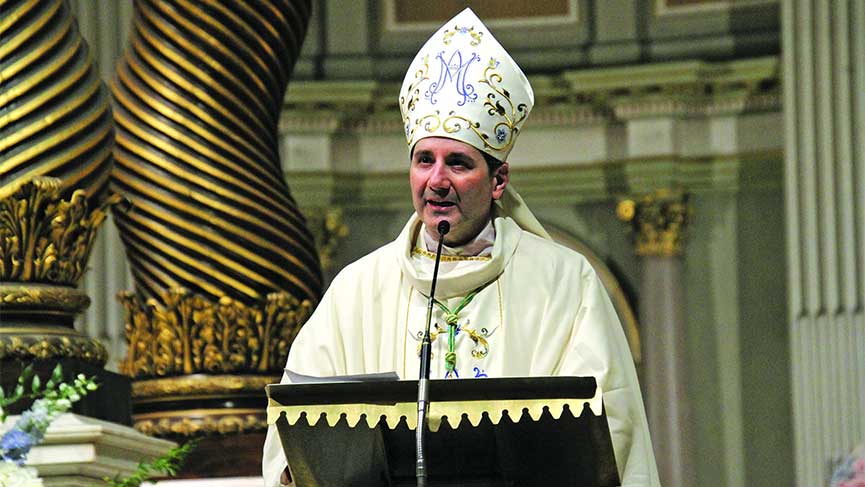 Montreal — An Italian Canadian in the uppermost echelons of the Catholic Church of Montreal: a source of pride for this entire Community whose faith has always been an integral aspect of our identity, a distinguishing feature and an unbreakable bond with our roots, our culture and our traditions. The man in question is the Most Rev. Frank Leo who, originally from the parish of Our Lady of Consolation, was last week ordained Titular Bishop of Tamada and Auxiliary Bishop of Montreal, in which apostolic mission he will work alongside Bishop Alain Faubert and Archbishop Christian Lépine.

Source - Vittorio Giordano (Translated by the Archdiocese of Montreal)

“When the Church welcomes a new Bishop, is that good news?” asked Archbishop Lépine – rhetorically - of the approximately 1,500 faithful gathered at Mary Queen of the World Cathedral, the seat of the Archdiocese of Montreal (and the third largest church in Quebec, after St. Joseph’s Oratory and St. Anne de Beaupré’s Basilica) on Monday, September 12. Judging from the standing ovation that greeted the announcement, the answer was a resounding “Yes, this is great news.”

The ordination liturgy was very moving. The election is God’s choice and is realized through a complex process which, for an auxiliary bishop, begins with a request submitted by the local bishop and culminates in a papal decree. Accompanied with the anointing, as is performed in an episcopal ordination, the election is an action of the Holy Spirit forever imbuing the person receiving it. Declaring his acceptance of the election, Msgr. Leo answered ‘Yes’ to the call from Archbishop Lépine and the concelebrants, Msgr. Serge Poitras and Msgr. Douglas Crosby.

In accordance with ritual, the future Auxiliary Bishop then prostrated himself in symbolic allusion to the death and resurrection of Christ. The episcopal college standing in a ring close by in front of the balustrade, the gentle laying on of hands and the welcoming embraces, the beauty of the music and the hymns, all these elements combined to make the Eucharistic celebration more meaningful as it continued in English, French and Italian, and with liturgical hymns in Latin.

Participating in the congregation were more than 100 priests, some forty bishops, including some of the Eastern rite and several Emeriti, including Msgr. Jude St-Antoine; Archbishop of Quebec City Cardinal Gérald Cyprien Lacroix; Msgr. Antons Prikulis representing the Nuncio; Anglican Bishop of Montreal Mary Irwin-Gibson; and Scalabrinian missionary and Episcopal Vicar for Cultural and ritual communities in the Archdiocese of Montreal Fr. Pierangelo Paternieri, along with representatives of numerous other religious communities, civil authorities, including the Diplomatic Corps, people of consecrated life, family members, friends, colleagues, and faithful – among whom were many members of the Italian-Canadian community. Following the celebration, all were invited to the reception at the Hotel Fairmont The Queen Elizabeth for light refreshments.

The new Bishop’s father, whose name is also Francesco Leo, sat for a brief but emotional and meaningful interview with Radio CFMB’s Ivana Bombardieri of Radio CFMB. Mr. Leo stated, “It is an incredible thing; I felt the strongest, most indescribable emotions. From the time he was nine or ten, Frank started to go to church, and he never stopped. He was an altar boy at Our Lady of Consolation parish, the church he always attended, in the evenings after school, then on Saturday and of course on Sunday. For our family this is most gratifying. I know that my wife was watching this beautiful ordination from up above.”

Newly ordained Bishop Frank Leo’s trajectory is quite impressive. Born in Montreal in 1971 to Italian immigrants Francesco Leo and Rosa Valente, Bishop Leo attended Eugenio Pacelli Primary School, John F. Kennedy High School and CEGEP Vanier. In 1990 he entered the Grand Séminaire de l’Archidiocèse de Montréal and was ordained a priest for the Archdiocese of Montreal on December 14, 1996. He was assigned to several Montreal parishes (as assistant pastor for Our Lady of Consolation, parochial administrator for Saint-Joseph de Rivière-des-Prairies and parish priest for Saint-Raymond-de-Peñafort) up until 2006. At that time, he accepted an invitation to enrol in the Pontifical Ecclesiastical Academy in Rome and thereafter joined the Diplomatic Service of the Holy See, working in various Apostolic Nunciatures throughout the world (2006-2012). On January 9, 2012, Pope Benedict XVI appointed him Chaplain to His Holiness, bestowing on him the title of Monsignor.

Upon his return to Canada, he took part in the formation team of the Grand Séminaire de de Montréal, teaching theology and philosophy while providing spiritual direction, formation and accompaniment to candidates for the priesthood. In the fall of 2015, he was appointed Secretary General of the Canadian Conference of Catholic Bishops (CCCB), this mandate ending in the fall of 2021. Since February 1, 2022, Msgr. Leo has been serving as Vicar General and Moderator of the Curia for the Archdiocese of Montreal.

Besides his advanced studies in Canon Law (Pontifical Lateran University), Diplomacy and International Law, Msgr. Leo has earned a doctorate in Systematic Theology (University of Dayton/ IMRI) specializing in Mariology, a Diploma in Philosophy (Pontifical Lateran University), a Diploma in Classical Studies (Université de Montréal) and an Advanced Studies Certificate in Spiritual Direction (Aquinas Institute of Theology). He has worked as a judge with the Canadian Appeal Tribunal and has taught theology, spirituality and philosophy in Montreal, Canberra (Australia), Dayton (USA) and Ottawa. Bishop Leo speaks English, French, Italian and Spanish. He is the President and founding member of the Canadian Mariological Society, a Knight of the Equestrian Order of the Holy Sepulchre of Jerusalem and a member of the Priestly Fraternity of St. Dominic (Dominican Third Order).