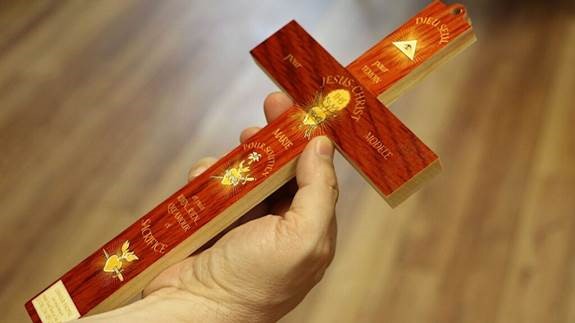 It is normal for all of us to become weary and discouraged sometimes, feeling we are at the end of our tether and certain that we have nothing left to give. That is what I experienced in France at the time of the beatification of Pauline Jaricot.

During that week, we were taken to visit the town of Ars. It was at the end of a long tour of the place, in the chapel of the Saint Jean-Paul II Seminary, and we were just finishing vespers prayers. I was very thirsty and tired from four heavy days of long meetings. As I huddled in the back of the church hoping to get a little rest, someone asked me to come up front and act as interpreter for the rector of the seminary and the parish priest of Ars, translating their talks on Pauline Jaricot into English.

The grace of God really helped me, right when I was at my weakest. The talks were on the three encounters between the Curé of Ars and Pauline. I made the effort to translate everything properly. When it came to the third and last encounter, I found myself moved by what was being said. The Curé of Ars had had a full day of confessions and, aside from being tired, had been feeling discouraged in his pastoral duties: this man, a saint, had felt hopeless? As Pauline arrived, he felt he had nothing left to give to the poor woman who had come seeking a compassionate ear and some spiritual advice to assist her through her personal trials. It was then that God gave him the words and the comfort that supported Pauline in the final years of her life, as she bore her cross to the end, with courage and holiness. The Curé of Ars gave her a cross inscribed with the words “God alone.” I thought of the Taizé song I hum when I’m at my limit; it is taken from the words of St. Teresa of Ávila, and the French means: “Let nothing disturb you, nothing frighten you; nothing is lacking to those who have God: God alone is sufficient.”

On the little cross given to Pauline is also written, “Our model Jesus, our help Mary.” These two great supports in the lives of the saints were brought back to me in the midst of my exhaustion… and exactly at that moment when the menace of the pandemic had the whole world trembling in fear. And I thought of the Pope, who at the outset of the pandemic called on Jesus Christ and Mary for protection. Later, on the cross given to Pauline by the Curé of Ars, a copy of which we all received as a souvenir of our visit to Ars, I saw two hearts, the two great loves of my life, who sustain me through any weariness whenever I feel I have nothing left to give. They give me what God himself wants me to have when I am weak.

As I continued to translate the words being spoken, I found myself completely inspired by the lives of Pauline and the Curé of Ars. It was as though the words were coming to me from above!

There is also a wise piece of advice inscribed on that same cross. It fairly encapsulates the life of every person who is baptized and sent forth, for the missionary disciple we all desire to be, even during our hours of weariness, when we lack hope and faith. It says: “Nothing else, nothing but love and sacrifice.” Yes, when we have only love to offer, love alone, it is truly the most beautiful thing to give.

After my work as interpreter was finished, God replenished my spirits, and I was able to carry out the rest of my day in fuller consciousness of Him.

…And just a while earlier I had thought I had nothing left to give!

Pope at WMOF Mass: ‘God bless and keep all the families of the world'
Diaconal ordination of Réjean Thibodeau