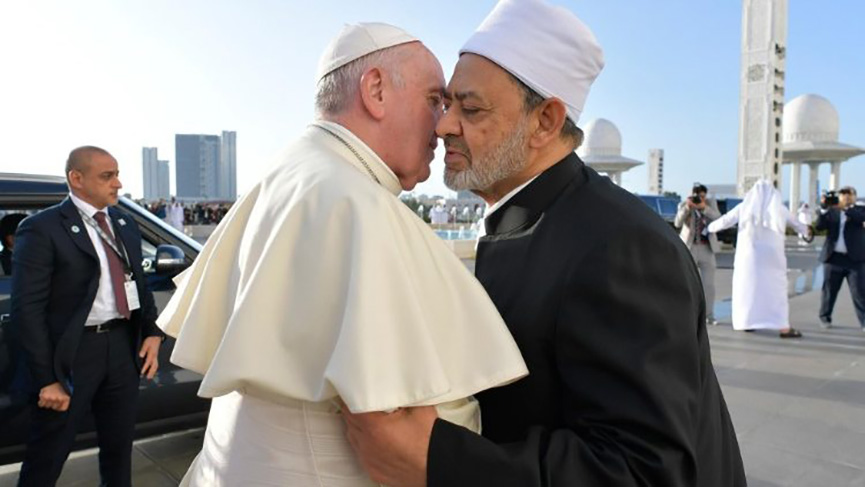 In the document signed by Pope Francis and Ahmed el-Tayeb on Monday in the United Arab Emirates, the two leaders issue a strong condemnation of terrorism and violence: “God does not want his name to be used to terrorize people”.

The “Document on Human Fraternity for World Peace and Living Together” signed on Monday afternoon in Abu Dhabi by Pope Francis and the Grand Imam of Al-Azhar, Ahmad el-Tayeb, is not only a milestone in relations between Christianity and Islam but also represents a message with a strong impact on the international scene. In the preface, after affirming that “Faith leads a believer to see in the other a brother or sister to be supported and loved”, this text is spoken of as a text “that has been given honest and serious thought”, which invites “all persons who have faith in God and faith in human fraternity to unite and work together”.

The document opens with a series of invocations: the Pope and the Grand Imam speak “in the name of God who has created all human beings equal in rights, duties and dignity”, “in the name of innocent human life that God has forbidden to kill”, “in the name of the poor”, “orphans, widows, refugees, exiles… and all victims of wars” and “persecution”. Al-Azhar, together with the Catholic Church, “declare the adoption of a culture of dialogue as the path; mutual cooperation as the code of conduct; reciprocal understanding as the method and standard”.

“We call upon ourselves, upon the leaders of the world as well as the architects of international policy and world economy, to work strenuously to spread the culture of tolerance and of living together in peace; to intervene at the earliest opportunity to stop the shedding of innocent blood and bring an end to wars, conflicts, environmental decay and the moral and cultural decline that the world is presently experiencing”.

The two religious leaders ask all people of religion and culture, as well as the media, to rediscover and spread “the values of peace, justice, goodness, beauty, human fraternity and coexistence”. And they firmly affirm their belief “ that among the most important causes of the crises of the modern world are a desensitized human conscience, a distancing from religious values and a prevailing individualism accompanied by materialistic philosophies”.

While recognizing the positive steps taken by modern civilization, the declaration emphasizes the “moral deterioration that influences international action and a weakening of spiritual values and responsibility”, which leads many “to fall either into a vortex of atheistic, agnostic or religious extremism, or into blind and fanatic extremism.” Religious and national extremism, together with intolerance, have produced the signs of a “third world war being fought piecemeal”.

The Pope and the Grand Imam therefore state that “major political crises, situations of injustice and lack of equitable distribution of natural resources – which only a rich minority benefit from, to the detriment of the majority of the peoples of the earth – have generated, and continue to generate, vast numbers of poor, infirm and deceased persons. This leads to catastrophic crises that various countries have fallen victim to despite their natural resources and the resourcefulness of young people which characterize these nations. In the face of such crises that result in the deaths of millions of children – wasted away from poverty and hunger – there is an unacceptable silence”.

They affirm the fundamental importance of the family, as well as the importance “of awakening religious awareness”, especially in young people, “to confront tendencies that are individualistic, selfish, conflicting, and also address radicalism and blind extremism in all its forms and expressions.” The two leaders recall that the Creator “granted us the gift of life to protect it. It is a gift that no one has the right to take away, threaten or manipulate to suit oneself. Indeed, everyone must safeguard this gift of life from its beginning up to its natural end. We therefore condemn all those practices that are a threat to life such as genocide, acts of terrorism, forced displacement, human trafficking, abortion and euthanasia. We likewise condemn the policies that promote these practices.”

They also “resolutely declare that religions must never incite war, hateful attitudes, hostility and extremism, nor must they incite violence or the shedding of blood. These tragic realities are the consequence of a deviation from religious teachings. They result from a political manipulation of religions and from interpretations made by religious groups”. For this reason, “We thus call upon all concerned to stop using religions to incite hatred, violence, extremism and blind fanaticism, and to refrain from using the name of God to justify acts of murder, exile, terrorism and oppression”.

“God, the Almighty, has no need to be defended by anyone and does not want His name to be used to terrorize people.”

The Declaration attests that “freedom is a right of every person: each individual enjoys the freedom of belief, thought, expression and action. The pluralism and the diversity of religions, colour, sex, race and language are willed by God in His wisdom, through which He created human beings. This divine wisdom is the source from which the right to freedom of belief and the freedom to be different derives. Therefore, the fact that people are forced to adhere to a certain religion or culture must be rejected, as too the imposition of a cultural way of life that others do not accept”.

It also states that “the protection of places of worship – synagogues, churches and mosques – is a duty guaranteed by religions, human values, laws and international agreements. Every attempt to attack places of worship or threaten them by violent assaults, bombings or destruction, is a deviation from the teachings of religions as well as a clear violation of international law”.

It is recalled once again that “Terrorism is deplorable and threatens the security of people, be they in the East or the West…, and disseminates panic, terror and pessimism, but this is not due to religion, even when terrorists instrumentalize it. It is due, rather, to an accumulation of incorrect interpretations of religious texts and to policies linked to hunger, poverty, injustice, oppression and pride. This is why it is so necessary to stop supporting terrorist movements fuelled by financing, the provision of weapons and strategy, and by attempts to justify these movements even using the media. All these must be regarded as international crimes that threaten security and world peace.”

The document states that “it is therefore crucial to establish in our societies the concept of full citizenship and reject the discriminatory use of the term minorities which engenders feelings of isolation and inferiority.”

The Declaration defines it as “essential requirement to recognize the right of women to education and employment, and to recognize their freedom to exercise their own political rights. Moreover, efforts must be made to free women from historical and social conditioning that runs contrary to the principles of their faith and dignity. It is also necessary to protect women from sexual exploitation… Accordingly, an end must be brought to all those inhuman and vulgar practices that denigrate the dignity of women. Efforts must be made to modify those laws that prevent women from fully enjoying their rights.”

After reaffirming the right of children to grow up in a family environment, to receive nutrition and education, the two leaders say: “All those practices that violate the dignity and rights of children must be denounced. It is equally important to be vigilant against the dangers that they are exposed to, particularly in the digital world, and to consider as a crime the trafficking of their innocence and all violations of their youth”.

Finally, “Al-Azhar and the Catholic Church ask that this Document become the object of research and reflection in all schools, universities and institutes of formation”. And they hope that the Declaration will become a “sign of the closeness between East and West, between North and South.”