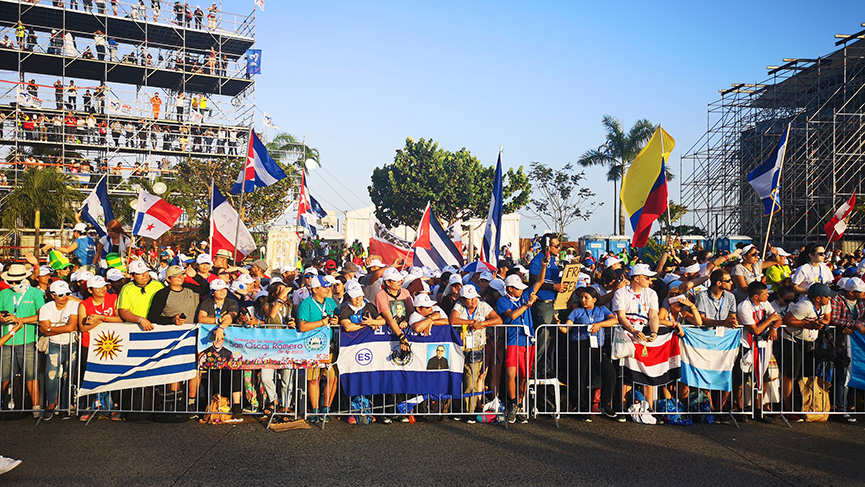 In the catechesis portion of his weekly General Audience, Pope Francis thanks God and all those who helped make World Youth Day in Panama a success.

Fresh from his Apostolic Journey to Panama, Pope Francis relived World Youth Day with the pilgrims present at the Wednesday General Audience.

One of the things that really struck him during the trip, the Pope said, was how parents lifted their children in the air when the Popemobile passed by.

“The pride of that family are its children. Children are security for the future,” he said.

Symphony of faces for Panama

Pope Francis said his whole journey to Panama was permeated by the “joyful presence of young people”. He called it a celebration “for them and for Panama, and even for the whole of Central America, which is marked by many dramatic moments and needs hope, peace, and justice.”

The Pope said WYD was a great symphony of faces and languages.

“To see all the flags joined together, waving in the hands of young people overjoyed to meet one another, was a prophetic sign, one that runs contrary to the current, sad tendency of conflictual nationalisms that raise walls and close themselves to universality and the encounter of peoples.”

Marian Way of the Cross

Pope Francis said WYD Panama carried a strong Marian aspect, which was apparent in the Via Crucis.

“Let me tell you a secret: I really enjoy doing the Way of the Cross, because it means following Jesus with Mary.”

Pulling a small Via Crucis out of his pocket, the Pope said he always one so he can pray it when he has time.

The Holy Father encouraged everyone to pray the Way of the Cross, “because it means following Jesus with Mary along the path of the Cross, where he gave his life for us, for our redemption. In the Via Crucis we learn love that it patient, silent, and concrete.”

Youth are ‘now’ of the world

Pope Francis then reflected on the importance of young people for society. He said their gifts are not reserved only for tomorrow. Young people, he said, “are the today for tomorrow. They are not ‘in the meantime’, but are the ‘today’, the ‘now’, of the Church and the world.”

The Pope said he also appealed to adults to properly educate and form young people, so that they can find work and a place in society.