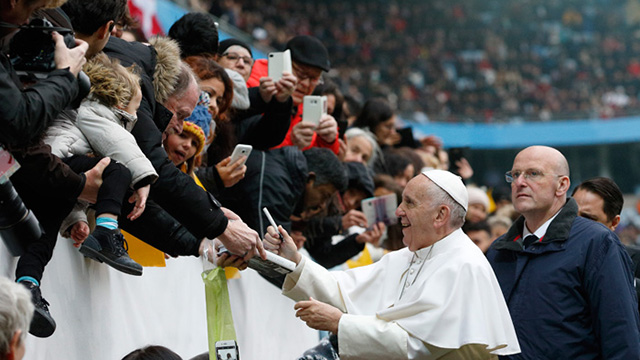 (Vatican Radio) Pope Francis and leaders of the Lutheran World Federation on Monday spent the day together in the Swedish cities of Lund and Malmo, leading thousands of people in a common commemoration of the Protestant Reformation.

Before leaving on this historic visit to Sweden, Pope Francis spoke in an interview about the goal of Catholics and Lutherans moving closer together, furthering what he calls the 'culture of encounter'.

He himself had already encountered the Lutheran president, Palestinian Bishop Munib Younan and General Secretary, Chilean theologian Rev Martin Junge, on several occasions in the Vatican. But the event in Lund cathedral on Monday marked a new step in the relationship between their two communions, as they presided together at a deeply symbolic prayer service, asking forgiveness for sins committed against each other in the past and pledging to work and witness closer together in the future.

Catholics and Lutherans from all parts of the globe were gathered in the ancient cathedral, which echoed with music and song in different languages and diverse religious traditions. From a haunting lament in Aramaic, through many of the well-known Taize chants, to a rhythmic song of thanksgiving from Botswana.

The three leaders processed in at the start of the service behind a colourful wooden cross, painted in typical Latin American style. It's the handiwork of an artist from San Salvador, whose own life has been a journey from the conflict of civil war, in which he lost family members, to his current role of providing work to keep other young men away from the widespread gang culture.

Wearing simple white cassocks and red stoles, the Pope and the Lutheran leaders led the congregation in prayer, before signing a joint statement pledging to continue the journey from conflict to communion, to make sure that Christian divisions are never again exploited and instrumentalised for political ends.

From the sombre setting of the cathedral, the Pope and the Lutheran leaders then travelled together to the nearby city of Malmo, where thousands of cheering young people were waiting inside the local ice hockey arena. The event, organised by Caritas Internationalis and by the Lutheran World Service featured music and testimonies about the way Catholics and Lutherans are working together on some of the most urgent issues of the day, from supporting refugees to combatting climate change, from educating orphans in Africa to promoting peace in Colombia or Syria.