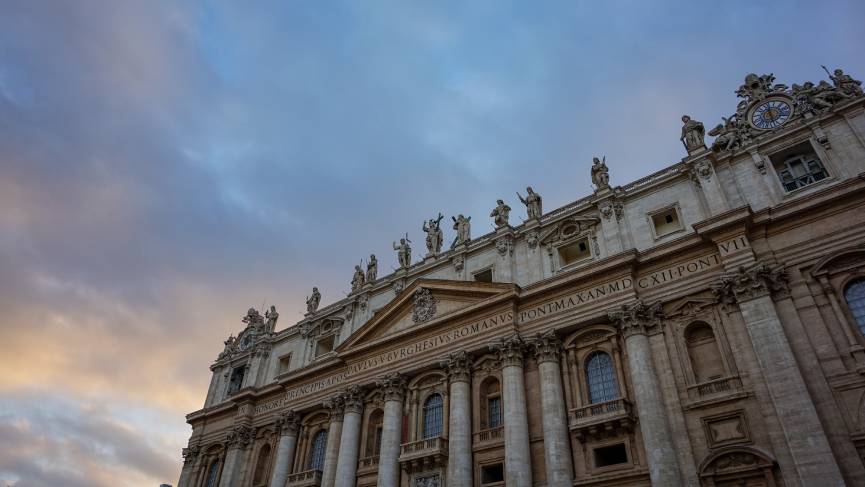 Addressing the faithful gathered for the Solemnity of Saints Peter and Paul, Pope Francis tells the story of these two Apostoles and of how just like with them, Jesus neither judges nor humiliates us when we face fear.

In his homily for the solemnity of Saints Peter and Paul, Pope Francis reflected on the central point: “Peter and Paul were free because they were set free”.

Holy Mass in St. Peter's Basilica was celebrated in the presence of bishops and cardinals as well as a delegation from the Ecumenical Patriarchate of Constantinople, led by Metropolitan Emmanuel of Chalcedon, who has come to Rome for the traditional exchange of delegations on the feast days of their respective patron saints.

At the beginning of the celebration, four deacons descended into the Confessio situated beneath the Basilica to fetch the Pallia to be imposed on the metropolitan archbishops appointed this year. Pope Francis blessed the Pallia which are signs  "chosen to symbolize the reality of pastoral care," in the hope that those who will wear them may "recognize themselves as shepherds of the flock."

The Pope explained that “Peter, the fisherman from Galilee, was set free above all from his sense of inadequacy and his bitter experience of failure, thanks to the unconditional love of Jesus”. He said that Peter, a skilled fisherman, often thought of giving up when he saw that he would catch nothing. He tasted fear, explained the Pope. “Albeit a fervent disciple of the Lord, he continued to think by worldly standards, and thus failed to understand and accept the meaning of Christ’s cross. Even after saying that he was ready to give his life for Jesus, the mere suspicion that he was one of Christ’s disciples led him in fright to deny the Master”.

“Jesus nonetheless loved Peter and was willing to take a risk on him”, explained the Pope. He encouraged Peter not to give up and gave him the courage to risk everything and the joy of becoming a fisher of men. “It was Peter whom Jesus called to strengthen his brothers in faith”, he added.

All that was possible only because Peter himself had been set free, said the Pope.

Turning then to the Apostle Paul, Pope Francis noted that he, too, experienced the freedom brought by Christ. “He was set free from the most oppressive form of slavery, which is slavery to self”, noted the Pope. He was also set free from the religious fervor that had made him a zealous defender of his ancestral traditions and a cruel persecutor of Christians, said the Pope. God, however, did not spare him the frailties and hardships that rendered his mission of evangelization more fruitful and Paul thus came to realize that “God chose what is weak in the world to shame the strong”, said the Pope.

With us as with them

“The Church looks to these two giants of faith and sees two Apostles who set free the power of the Gospel in our world, only because first they themselves had been set free by their encounter with Christ”, said the Pope. He stressed that they were neither judged nor humiliated by Jesus, who instead “shared their life with affection and closeness”. He does the same with us, said the Pope.

We too have been touched by the Lord; we too have been set free.  Yet we need to be set free time and time again, for only a free Church is a credible Church.

“Peter and Paul bequeath to us the image of a Church entrusted to our hands, yet guided by the Lord with fidelity and tender love”, said the Pope.  This, he described, is “a Church that is weak, yet finds strength in the presence of God.  A Church set free and capable of offering the world the freedom that the world by itself cannot give: freedom from sin and death, from resignation, and from the sense of injustice and the loss of hope that dehumanizes the lives of the women and men of our time”

Ending his homily, Pope Francis noted that it is “in giving his life that the shepherd, himself set free, becomes a means of bringing freedom to his brothers and sisters”. We pray for all Pastors, concluded the Pope, for the Church and for all of us: that, set free by Christ, we may be apostles of freedom throughout the world.

CCCB Statement - Date of Delegation of the Holy See