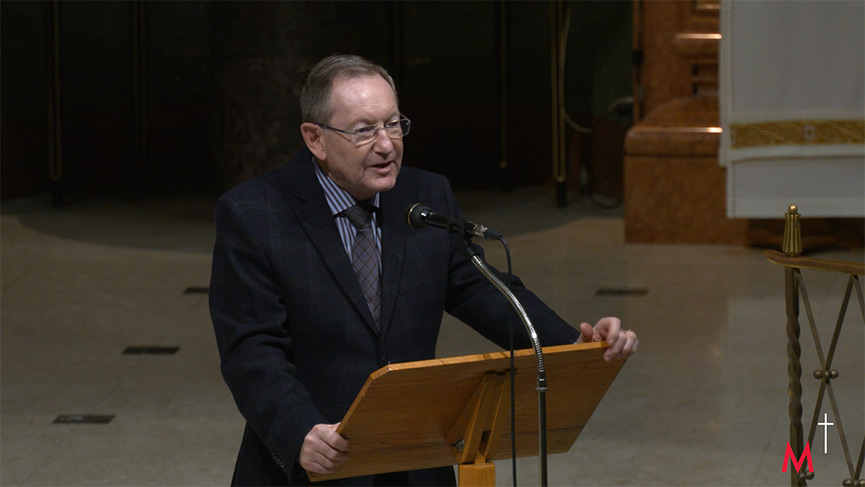 Me Racicot presents his reflection in view of Bill C-7; expanding access to assisted death.

Before addressing Bill C-7, it is important to get our facts straight.

Medical aid for dying began to be permitted in Quebec as of December 10, 2015, and in Canada as a whole on June 17, 2016.
It should be remembered that, prior to these laws, it was permitted to refuse, interrupt or stop treatment, even though such action might accelerate death.

The same was true for sedation, i.e. the relief of pain even to the point of unconsciousness, as long as the sedation was done without intent to cause death, even though sedation might accelerate death.

This was permitted not only by virtue of civil law but also by virtue of the positions taken by the Catholic Church through the declarations of Pope Pius XII in 1951, '56 and '57 and those of Popes John XXIII, Paul VI, John Paul II, Benedict XVI and the more recent declarations of Pope Francis, all of whom recognized the ethical character of these decisions but condemned euthanasia and assisted suicide in all their forms. This position is summed up in nos. 2276 to 2279 of the Catechism of the Catholic Church.

With the coming into force of Bill 52 entitled An Act respecting end-of-life care on December 10, 2015, it became permissible for a physician to practice euthanasia, called "medical aid in dying," on a person of full age, capable of giving consent, suffering from a serious and incurable illness, being in an advanced and irreversible decline in capability and experiencing constant and unbearable physical or psychological suffering that cannot be relieved in a manner the patient deems tolerable.

However, the person had to be considered to be "at the end of life."  In fact, the entire scope of this Quebec law was precisely about end-of-life care, and when it was adopted, both Mrs. Yvon and Dr. Barrette reiterated that only persons at the end of life would be eligible for medical aid in dying. As for people suffering from degenerative diseases, they too were eligible, but only when they reached this final stage of life.

On February 6, 2015, the Supreme Court of Canada, in a decision known as Carter, struck down the provisions of the Criminal Code that prohibited euthanasia and assisted suicide despite the request of a suffering person, on the grounds that they violated the right to life, liberty and security of the person guaranteed by s. 7 of the Canadian Charter of Rights and Freedoms.

Following this decision, the federal Parliament amended the Criminal Code through Bill C-14, which came into force on June 17, 2016, to allow not only euthanasia, as in Quebec, but also assisted suicide, as long as these acts are performed by a physician or a nurse practitioner on any adult who has a serious and irremediable medical condition. Hence, the Criminal Code uses the phrase “medical assistance in dying” to describe both euthanasia and assisted suicide while the Quebec law uses “medical aid in dying” to describe only euthanasia.

Contrary to the Quebec law, the Criminal Code, as amended by   C-14, allows “medical assistance in dying,” not only in the event of illness, but also for persons suffering from a serious and incurable disease or disability.

Unlike Quebec, which specifies in its law that medical aid in dying is only permitted for people at the end of life, the amendments to the Criminal Code allow medical assistance in dying in the form of euthanasia or assisted suicide to persons whose "natural death is reasonably foreseeable.” However, this criterion, which was interpreted rather strictly when these provisions first came into force in June 2016, has been interpreted more and more broadly over time, particularly at the instigation of physicians who practice medical assistance in dying.

In a decision rendered on September 11, 2019, known as Truchon, the Superior Court of Québec invalidated the "end of life" eligibility criterion in the Quebec law and the "reasonably foreseeable natural death" criterion in the Criminal Code as being discriminatory against persons whose suffering is equally great but who are not at the end of their lives.

The Quebec and federal governments did not have the courage to appeal this decision. It must be said that the court's choice to render this decision in the middle of a federal election campaign did not help.

Quebec chose not to amend Bill 52 and simply no longer took into account the "end of life" criterion restricting eligibility for euthanasia.
By contrast, the federal government chose to amend the Criminal Code to address the invalidation of the "reasonably foreseeable natural death" criterion.

And here we are with Bill C-7, a federal Bill to amend the Criminal Code, which is currently being debated in the federal Parliament.
Bill C-7 allows for euthanasia and assisted suicide for people who are not at the end of their lives, as the Court requested in Truchon, but it goes much further.

Thus, C-7 proposes to eliminate several safeguards adopted in the current version of the Criminal Code. And C-7 proposes different safeguards depending on whether one is at the end of life or not.

ad vitam - The Webzine of Consecrated life in Canada
Pope at Audience: Christian unity achieved only through God’s grace