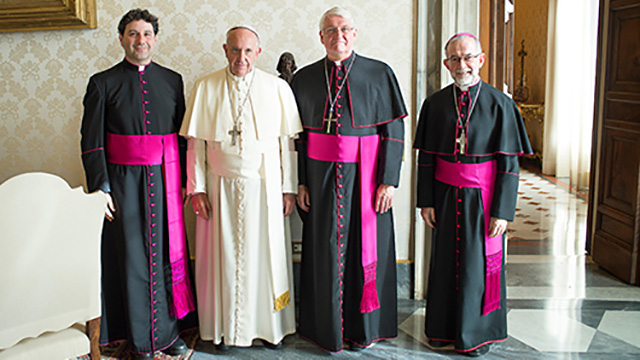 (Radio-Vatican) Members of the Presidency of the Canadian Conference of Catholic Bishops (CCCB), were in Rome in mid-November for their customary visit to the various Dicasteries of the Roman Curia.

Conference President Bishop Douglas Crosby, O.M.I., of Hamilton; Vice-president Bishop Lionel Gendron, P.S.S., of Sain-Jean-Longueuil; and Msgr Frank Leo, Jr., C.S.S., the CCCB's General Secretary were received in an audience with Pope Francis at the beginning of their stay in Rome. Later, the prelates met with members of different Dicasteries.

Among other issues discussed, Bishop Crosby mentioned concerns about the recently enacted laws in Canada permitting euthanasia and assisted suicide.

The Conference President also spoke of positive developments with regard to Dioceses in the northern part of Canada.

Overall, Bishop Crosby said the encounters with members of the Curia are "always very interesting," giving both the Bishops and Curial officials a chance to get to know one another.

The CCCB Presidency's annual visit to Rome concluded on November 16, just a few days before the solemn close of the Extraordinary Jubilee of Mercy.

Led by the Spirit for Mission
"Toward the Future, United in Faith and Trust"

"Toward the Future, United in Faith and Trust"