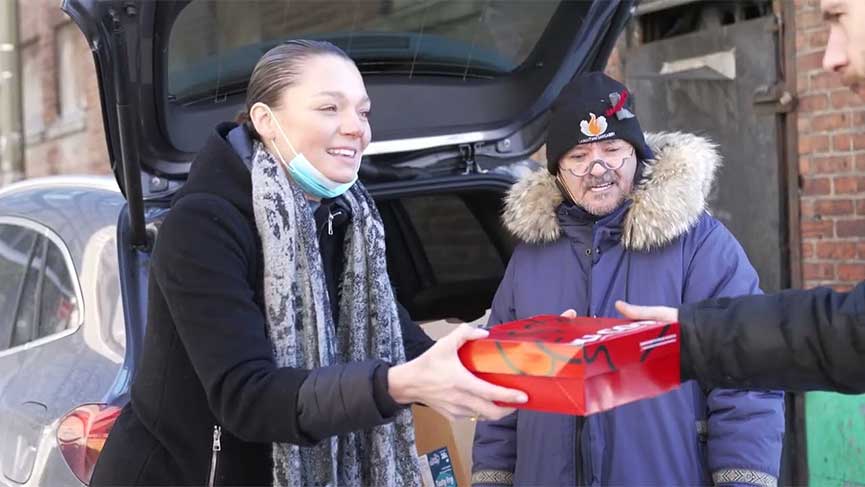 Among the wonderful stories about volunteering that are unfolding in the Montreal Archdiocese, the one we are sharing with you today is somewhat surprising, to say the least.

"It's never too early or too late, a little gesture can change a life" NC

Currently, the partnership between la Reine des Bières and Notre-Dame de la Rue distributes 40 hot meals a week year-round to the homeless of Montreal (Refuge des Jeunes de Montréal youth shelter, Papineau metro station). In January, that figure reached a peak of 275 meals. And earlier in December 2021, a donation of 1,000 wollen socks came along to boost the partnership’s efforts.

These actions remind us of two unchanging realities in our lives as Christians. The first is that, regardless of our social background and whatever our origins, we are all connected in our human condition: eating, bathing, sleeping with a roof over our heads. The homeless live from day to day. Just one meal means they can imagine tomorrow; ‘afterwards’ becomes a reality. For a moment, they are able to forget about their problems and challenges and take the time to have a friendly conversation over a hot lunch in a warm and caring atmosphere. The second reality is that, throughout the Gospel, Christ calls us to love by placing ourselves in the service of others: "Just as you did it to one of the least of these who are members of my family, you did it to me" (Matthew 25:40). The most striking example is Jesus’ washing of the disciples’ feet at the Last Supper.

No one could have predicted that Noémie Charest, coming from the small town of Granby, would by the age of 24 have become an entrepreneur who was deeply involved in volunteer action.

After graduating from Sacré-Coeur high school in Granby, where she created a structure for herself along both academic and methodological lines, Noémie set out for Hawaii at the age of 18. During her time abroad, she developed her passion for discovering other cultures and reaching out to encounter her fellow man in a more personal way.
After that bold adventure, she turned her hand to professional modelling, which took her to Italy, France, Greece and eventually Toronto. But even a flourishing career in the prestigious world of fashion could not make her forget her fervent wish to be of service. This desire to be near those most in need arises in part from her own personal history, as well. Noémie’s sister experienced a number of very dark periods in her life, one of which saw her living on the streets for several months, during which time her family had no news of her. That experience only amplifies Noémie's eagerness: "I recognize the gifts of grace that have been given to me along my journey, and living in contact with human suffering has strengthened my desire to devote myself to this cause" (Luke 12:48). In conclusion, Noémie reminds us that, beyond the money invested, the energy deployed and the time spent, "Service is love through action."

If Noémie’s cause interests you and you would like to participate in one of these missions, please contact La Reine des bières organization at info@lareinedesbieres.com

Bishop Appointed for the Diocese of Trois-Rivières