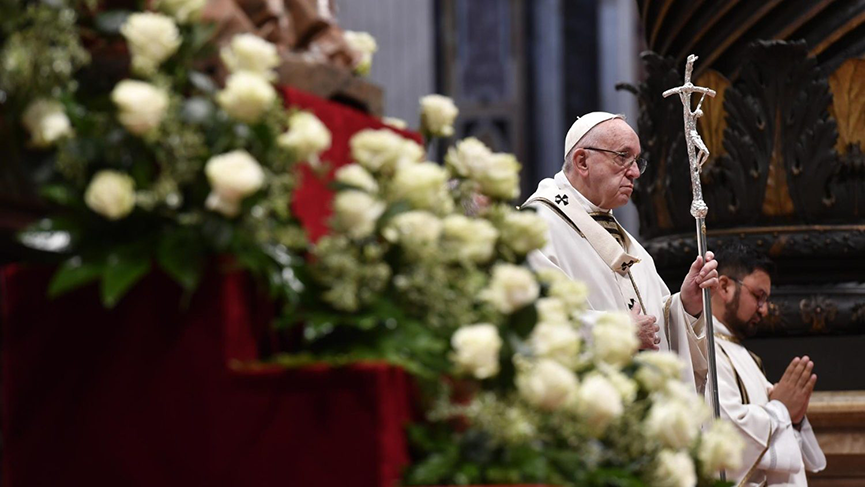 On the World Day of the Poor, Pope Francis reflects on the Gospel for the Dedication of the Basilica of St Peter, saying that like Jesus, Christians must go down to meet the needs of others after having gone up to meet God in prayer.

“This is the road Jesus tells us to take”, Pope Francis said in his homily on Sunday, during Mass on the Second World Day of the Poor. That road takes us down to meet our brothers and sisters after we have spent time on the mountain in prayer with God. These words began the Pope’s homily which he delivered in St Peter’s Basilica in front of 6,000 of Rome’s poor and those who assist them.

Jesus goes against the current

The Gospel Pope Francis reflected on was that of Peter walking on the water during the storm on the lake (Matthew 14:22-33) on the Solemnity of the Dedication of St Peter’s Basilica. At the “height of his success”, Jesus goes off alone up to the mountain to pray. He then goes down into the midst of the storm. Both of these actions, the Pope pointed out, go against the current: “He leaves behind success, and then tranquility”. Jesus’ followers are also called to follow the road Jesus “tells us to take: go up to God and come down to our brothers and sisters”, Pope Francis said.

After leaving success and tranquillty behind, Jesus heads toward his disciples in the midst of the stormy sea. He wants to reassure them. The sea, the Pope said, is a symbol of evil on which Jesus tramples. “It is a revelation of the reassuring certainty that Jesus, and Jesus alone, triumphs over our greatest enemies: the devil, sin, death and fear”, he said. In the storms we experience it is not the storm itself that is the issue, but “how we are navigating life”. “The secret of navigating well", the Pope said, “is to invite Jesus on board”. Then the winds will die down and there can be no shipwrecks.

Connecting the Gospel with the World Day of the Poor, Pope Francis said that Peter’s cry for help is echoed in the poor, the unborn, the starving, the abandoned elderly, those who “face he storms of life” without a friend, “those forced to flee their homes…for an uncertain future”, those deprived of the basics.

“The cry of the poor daily becomes stronger but heard less, drowned out by the din of the rich few, who grow ever fewer and more rich”.
Jesus stretches out his hand

Jesus reaches out his hand to save Peter. That gesture shows us “why it is important for all of us to live our faith in contact with those in need”, Pope Francis continued. Hands folded in indifference or frustration is an unacceptable response to evil for Christians, the Pope said. “No.  As believers, we must stretch out our hands, as Jesus does with us.” God hears the cry of the poor, but do we, the Pope asked.

"Stretch out your hand to us, Lord, and take hold of us.  Help us to love as you love.  Teach us to leave behind all that is passing, to be a source of reassurance to those around us, and to give freely to all those in need.  Amen."